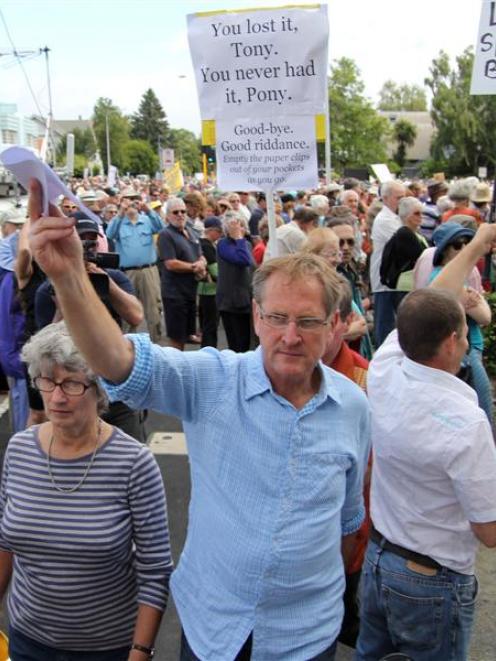 Organiser Peter Lynch leads the protest march to the Christchurch City Council offices on Wednesday to deliver a letter calling for greater transparency. Photo by Geoff Sloan.
Local government in this country is not delivering to the expectations of communities, and not just in strife-torn Christchurch City, writes Mike MacLeod, chairman of the Draco Foundation.

If the local government sector was a person they would be ponderous, socially-inept and morally bankrupt. They would be filthy rich and very lazy. If you had a problem they would not care and if you complained because something they did hurt you or your family, their response would be "so sue me". Not the sort of person who would voluntarily join a support group to seek help.

The Christchurch City Council is squirming under public scrutiny at the moment. There is a rift between the councillors, ratepayers think the CEO gets paid too much and is in cahoots with the mayor, people are being kept out of perfectly safe houses, while thousands of buildings have been razed because they never really complied with earthquake standards or were built on large ponds of unstable swampland. But these problems are not limited to that city; they are representative of the local government sector as a whole.

Since the global recession hit, New Zealanders have begun to focus less on global issues and more on local ones.

Grassroot community organisations are growing in popularity. As citizens start paying more attention to local issues, some uncomfortable home truths are emerging. I will give voice to one right now, and I am sure many will agree: local government in this country is not delivering to the expectations of communities.

Nowhere has the shift from global to local been more evident in this country than post-earthquake Canterbury.

Residents' associations have worked with community boards to get on top of many of the larger social issues.

Community gardens, time banks, bus services and micro-schools played a role in the response to the earthquakes and the people of the city are grateful.

They - more than any in this country - appreciate the importance of neighbours and neighbourhoods.

In the days following the February earthquake the Government showed little faith in the ability of councils to cope and that took ratepayers by surprise.

Back then they believed in local government.

Now the chickens have come home to roost. As a former colleague pointed out to me "the Christchurch City Council has always been like this. it's only since the earthquake happened that ratepayers have started to take notice of them".

Suddenly the city council - which had coasted along under the radar for many years - has been thrust into the spotlight.

Albert Einstein once said "we can't solve problems by using the same kind of thinking we used when we created them". The problem the ratepayers of Christchurch face has been created - in my opinion - by a lack of openness, transparency and public accountability. Even though the Local Government Act 2002 clearly outlines how local authorities should be run, it seems to be treated more as a loose guideline than a statutory requirement. And there is absolutely no recourse open for the public to demand compliance with the Act, aside from the extreme provisions allowed to the minister.

Nick Smith has chosen to ignore the Act in the case of Christchurch and create an official position that has no basis in law. In doing so he is taking the same attitude as councils often do: "we don't need to abide by the law. We are the law".

He is using the same thinking that caused the problem, so it is no solution, rather a sticking plaster to cover a disease afflicting the whole of the local government sector.

While many people are seeing the appointment of the so-called Crown Observer as an inspired solution, the consequences of the minister's appointment are serious. If the Crown Observer is not a legally-sanctioned appointment, then is he subject to the Official Information Act?

How do we know what advice he is providing to the councillors?

Minister Smith has said the appointment was made at the "invitation" of the council, but who is paying him?

And why is he reporting back to the minister?

Council Watch agrees whole-heartedly that sacking the council would be ridiculous but the Local Government Act is not limited to that course of action. The minister could have achieved something akin to a Crown Observer by using S.254 of that Act. But there is a process required; you cannot just interfere with a local body - it has to be open and transparent, in full public view.

Ratepayers round the country are already calling for the appointment of Crown Observers to their councils, but placing an unsanctioned observer with no legal standing in a council solves nothing. The changes needed are systemic and legislative. The sector as a whole needs to start performing better, be more adequately resourced by central government and start working in partnership with local communities to achieve outcomes.

This is the perfect time for the citizens of New Zealand to take issue with the minister's actions, before this thing starts getting out of hand.

The Draco Foundation is dedicated to the protection and promotion of democracy and natural justice in New Zealand and among its many activities operates Council Watch and the National Residents Association Database. Further information can be found at www.civilsociety.org.nz.