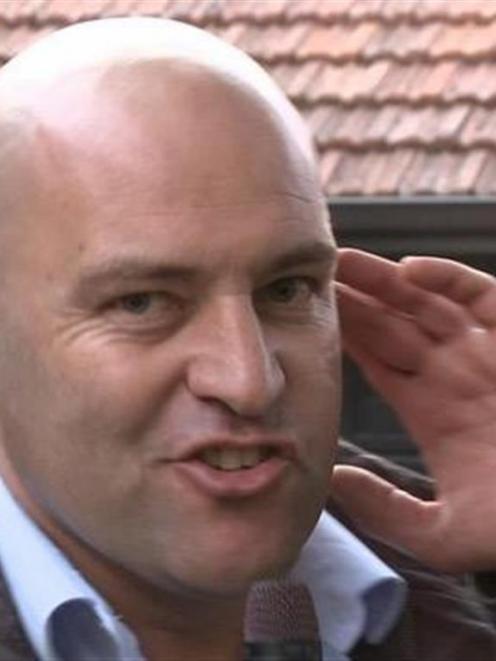 Leigh Hart. Photo supplied.
The fascinating thing about Lorde's climb to the top of the global music tree was the sheer speed of it.

American singers have gone from shop assistants to stadium-screaming fame through the expedited surrealism of American Idol and its copying contests, but Lorde had no such hand-up; she came from nowhere.

New Zealanders love climbing off the bottom of the world to do this - Crowded House and Flight of the Conchords - and in a world where everything now happens incredibly fast, and every potential punter has immediate digital access, I find it perplexing that Leigh Hart, surely New Zealand's funniest man, is taking so long to break the overseas market over his thigh.

TV One ran the first series of LNBB late at night, as they did with Hart's memorable Moon TV, but the current series is online, a similar viewing position Hart has been consigned to in the past with his excellent 2007 and 2011 World Cup Rugby shows, unique coverage of the event from a man who, in 2007, wasn't there.

Again done from a distance was 2011, with a continuing theme of famous All Blacks, Richie always promised every week and never delivered.

Things That Aren't There is an ongoing theme.

Late Night Big Breakfast, relentlessly spoofing TV's view of Kiwi Living, has wild satire on staples like gardening and food, and guests are regularly invited on and barely interviewed.

Episode 3, a Music Special, saw Neil Finn's every answer drowned out by competing babble from Hart and co-host Jason Hoyte, the latter an exceptional part of the seven-strong cricket commentary team.

Hart then asked Finn to perform a song, naming a raft of titles, all written by brother Tim, except one, written by Dave Dobbyn.

Finn resignedly offers to sing his brother's I Hope I Never, and Hart, who once led the band Wild Turkey through Europe before they were jailed and deported from France, said he would play along.

He quickly snapped two strings while aggressively attacking two tuning pegs, and then broke the entire neck off the guitar.

Finn battled on beautifully while Hart moved to a keyboard, playing an unrelated melody under noise-cancelling headphones.

The week before in the food segment - how to cook a fish fillet - there was no fish fillet at all, though great care was taken at the end plating the tiny slice of lemon relative to the fish that wasn't there.

Hart loves to play the moron.

As pig-ignorant statistics man in the cricket commentary team, he reminds me of a futsal coach I recently heard telling her team the winner would be the one who scored the most goals.

A highlight is the literary segment Bookshelves with writer Joe Bennett.

In episode 2, Hart looked at Bennett's latest book, but spent the entire interview breaking down the price and who gets what, particularly Bennett.

Episode 3 saw Bennett introduced, the fake bookshelf wallpaper fell on his head, and they cut to resident singer Mike The Mongolian.

One presumes Bennett's position in the chair, with his fist covering his mouth, is purely designed to stop him disintegrating with laughter at what Hart might throw at him.

He has done several comedy series, always with great ideas, made hilarious TV ads - Hellers Bacon the best - fronted mainstream TV docos - this year's DNA series and 2013's Pike River retrospective Descent From Disaster - written columns for The Herald, and even has his own beer, Wakachangi, primarily designed, he says, for big student parties in Dunedin.

Meanwhile the outer world waits for Leigh Hart to break through.

The man is a stone genius.