Just the luck of the draw 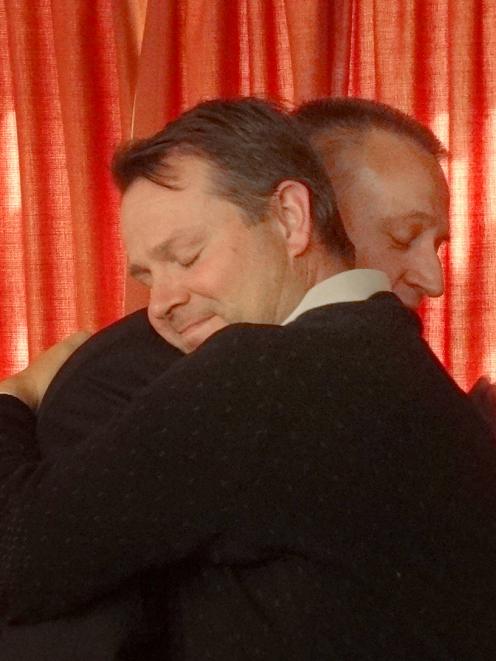 Glyn Lewers (front) and AJ Mason embrace after the coin toss. PHOTO: GUY WILLIAMS
It has always been the way that some people appear to have all the luck, while others never seem to get an even break.

Queenstown Lakes District Council candidate AJ Mason can be forgiven for feeling he is in that second camp, after a dramatic coin toss was needed to decide a rare voting tie with Glyn Lewers for the sixth Wakatipu ward seat.

Mr Mason, a technology strategist, and Mr Lewers, the chairman of the Frankton Community Association, were level-pegging on 2183 votes apiece after a manual recount requested by Mr Lewers. That came after a nerve-racking, see-saw wait for both men over nearly three weeks.

Preliminary results on local election day, October 12, put Mr Lewers ahead by two votes. But the final count five days later reversed his fortunes, with Mr Mason ending up one ahead, with 2184 votes.

When the recount was carried out, district court Judge Mark Callaghan - who also authorised the coin toss - said Mr Mason had received an extra vote because a small smudge next to his name on a ballot paper was counted erroneously by software to be in his favour.

In the end, the toss of a $2 coin in front of council electoral officer Jane Robertson came up heads and for Mr Lewers. For Mr Mason, it was close, but no cigar.

It was a rough way to lose, but it was also a rough way to win. As any serious candidate will tell you, they would rather be victorious by having a clear majority from the electorate.

What must have made the outcome even more unpalatable for Mr Mason was that, during the interregnum, he had experienced a brief taste of life as a local body representative, after being sworn in as a councillor and undergoing an induction process.

The palaver on the Queenstown Lakes council was, unfortunately, not the only example of a tied result at this year's elections. Up the road, Environment Canterbury also had a stalemate, but of a different kind.

Canterbury's regional council was having its first fully democratically elected count since John Key's National government unceremoniously sacked councillors in March 2010 over alleged dysfunctional relationships with the region's other councils and their slowness in determining important water policies.

At its first council meeting, re-elected regional councillors Claire McKay and Peter Scott both received seven votes in their bids to be deputy chair.

Rather than a coin toss, the deadlock was broken by drawing their names out of an environmentally friendly coffee keep-cup, Mr Scott becoming deputy chairman.

Luck has a great deal to do with people's lives and, according to one dictionary definition, moulds circumstances, events or opportunities.

Some people just seem plain jammy. We all know somebody like that, someone who wins every raffle, meat tray or box of Favourites going.

We are also reminded of sport and how results can seem unfair or come down to the wire, with results decided on mind-bending Duckworth-Lewis-Stern method calculations and run rates in cricket, or heart-breaking penalty shootouts in football. Both can make a mockery of what to most players, spectators and officials would have seemed the most just and obvious outcome of a tie.

It certainly is harsh when the aspirations of well-meaning, civic-minded and publicly supported citizens are determined by a coin or lots. By a quirk of statistics, a tie between candidates becomes gradually less likely as the number of voters rises. This should be another reason to focus on increasing voter turnouts, to make voting as easy as possible and encourage all those eligible to fill in their forms.

Mr Mason has certainly experienced the rough end of the local body process. He will be left ruing the fact that, as they say, life can turn on a dime.