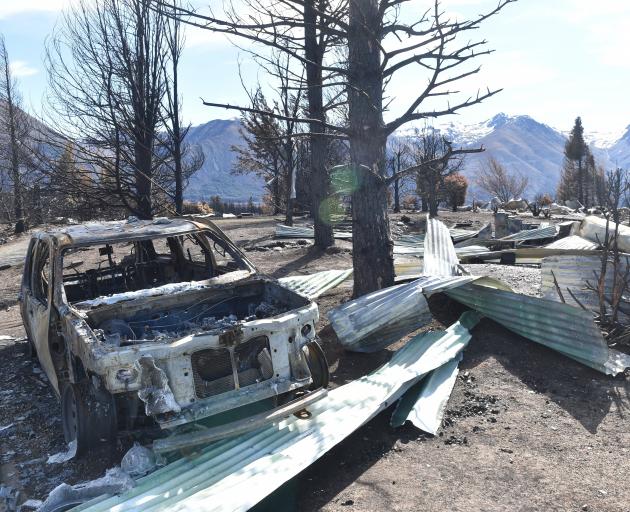 The burnt-out Lake Ohau Village. PHOTO: PETER MCINTOSH
When the clouds turned orange and the sun turned red over much of the South Island in February 2020, it was like some apocalypse had been visited upon us.

The ash and smoke from those horrific Australian bushfires was a reminder that New Zealand is not isolated from the rest of the world’s environmental problems. It also gave us an inkling of just how bad wildfires can be and what these huge infernos might be like in future in a warmer, drier climate if they break out here.

Our downwind experience of those terrible events was alarming but not without precedent. The cloying, smoky atmosphere and the surreal bronze light that filtered through it were just a tiny sample of how awful it was for residents of Lake Ohau Village during a fire in the early hours of Sunday, October 4 last year.

Gale-force winds that night with gusts up to 130kmh fanned a ferocious blaze which turned into one of the worst scrub and forest fires in modern New Zealand history, burning around 5000 hectares of land and destroying 48 homes.

It was a miracle nobody was killed.

The conflagration lasted nine days and at one stage required more than 100 firefighters and the use of 11 helicopters to staunch the flames and stop their spread. The cost of the operation was estimated around $1.35 million.

As well as the obvious damage to housing and community assets, to the landscape, native flora and fauna, and to livestock, the massive fire has left a lasting mental impression on residents of the small village. They will still be in shock, and most likely suffering from trauma and sleepless nights.

No surprise then that they have been anxiously awaiting the results of a Fire and Emergency New Zealand investigation into what started the fire. That report points the blame at electricity lines company Network Waitaki.

Fire investigators have discovered the blaze was accidental and the result of an electrical short-circuit on a power pole a few kilometres upwind of Ohau Village. The sparks from the short-circuit set fire to dry vegetation below the lines.

Te Kei region manager Mike Grant said the desiccated nature of the vegetation, the shape of the terrain, and the warm and very blustery winds combined to stoke the fire and push it towards the village and its surrounds.

It was due to quick thinking and action from residents, who initiated the community’s wildfire plan, and the swift response from the Twizel and Omarama volunteer brigades and local police, that everyone was evacuated safely.

Network Waitaki has rejected the findings, saying it is clear, from its data, that the suggested short-circuit was not the cause of the fire. The lines company says there are also other inaccuracies in the report.

It is understandable that villagers have eagerly awaited the report and want to know what caused it and whose fault it was. It is hardly surprising some are now considering whether legal action might be appropriate.

Major wildfires like this offer a disturbing glimpse of our future if we fail in our efforts to retard accelerating rates of global warming.

Communities in fire-prone areas need to ensure they have escape plans in place, and we all need to be extra vigilant during hot, dry summers.