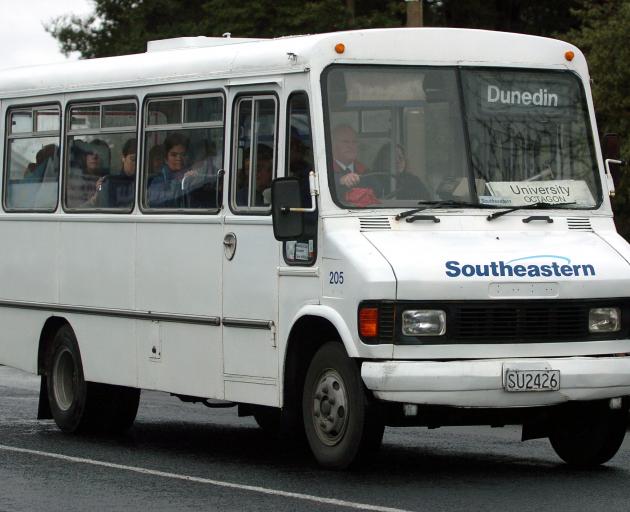 A small Dunedin bus from 2006, when this editorial was written. ODT file photo.
The notion of making bus travel fare-free is back in the news. This editorial first appeared in the Otago Daily Times in 2006.

Bus patronage in Dunedin slips away with each passing year, in common with most smaller cities in the developed world. The convenience of the car and the poor image of buses have combined to make bus use largely the preserve of those with little other choice.

Despite increasingly rational reasons for climbing on board, the middle classes of New Zealand resist. Commuters and shoppers seem willing to bear increasing petrol costs as well as either the price of car parks or the bother and time involved in leaving their vehicles long distances from workplaces.

Despite this, the report advocates only tentative advances. And any improvements seem to be at the speed of a bus jammed in George St traffic. Flair and fresh ideas are notably absent.

Given the proposed extra spending, given the roading money needed to alleviate heavier traffic and given the cost of provision for additional parking, the time has come to examine an idea proposed on the opinion pages of this newspaper last month.

What about free buses, in some form or another? Has this option been seriously considered? Would losses in revenue be that significant compared to the other costs saved? Is the community willing to pay a little more so that even non-bus users benefit through less crowding on the roads and easier parking?

Many cities around the world have instituted free buses for their inner cities, and nearby Invercargill has a free bus service for a suburban circuit, another for the central business district and other buses are free from 9am to 2.30pm, which includes the city’s limited Saturday routes. The free buses have loaded additional costs on both Land Transport New Zealand and the ratepayers, but councillors considered the extra costs worthwhile when the scheme began five years ago and have not yet changed their minds.

An additional promotional push for Invercargill’s buses is also under way at present using the lever of higher petrol prices.

The supporters of free buses can point to the success of a city-wide scheme since 1997 in the Belgium city of Hasslet, which is not too dissimilar in size to Dunedin. Interestingly, car ownership has not dropped. Instead, residents are simply driving their cars less.

Free buses, wherever they are instituted, are faster — not being interrupted by fare collection — and there are the potential congestion and pollution gains as well as those road and parking building costs which might be avoided.

On the other hand, sceptics can argue that free buses trials have been abandoned in some United States cities and that other reasons besides price are more significant causes for declining passenger numbers.

The idea of free buses, nevertheless, deserves sharp examination and, probably, some sort of trial. For example, what about free buses on the weekends, when near-empty vehicles ply the streets on tight timetables?

There would be minimal disruption and, while sudden popularity for weekend buses is most unlikely, a limited experiment could ascertain if there was any worthwhile response, especially from weekend shoppers.

Obviously, the trial would have to be accompanied by a burst of publicity so it was not set up to fail. A particular city route could also be targeted, and free services in other centres appraised.

It could well be that universal free bus services are impractical or too expensive for Dunedin — but, at least, such proposals are worthy of serious consideration and analysis.