Joy to be had in writers writing about sport 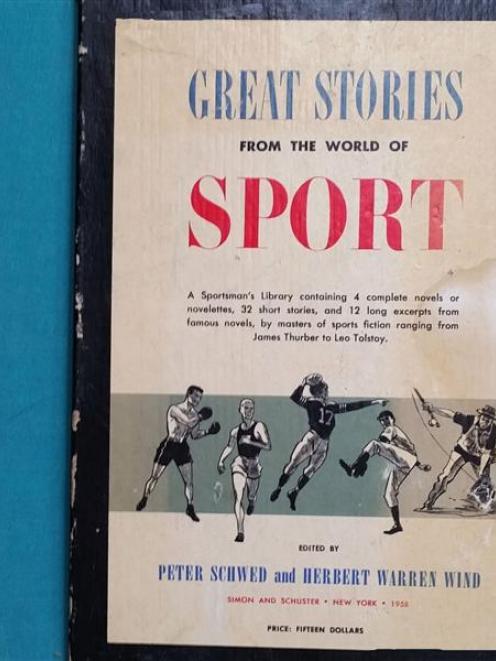 Photo by Roy Colbert.
I was 15 years old when I realised there was such a thing as good sports writing.

Until then, sports writing was just reportage: who played, who won, who lost.

No colour, no beautiful language.

Then I read my first copy of the American magazine Sports Illustrated.

It was one of those days when you are hauled off to someone's house by your parents and just left there to find your own fun for what seems like 20 hours.

On this particular occasion, we were visiting a man who was apparently close to dying; his skin was bright red, and he shuffled very slowly around the room as if massively sunburnt.

I soon wandered off and found this huge pile of Sports Illustrated magazines in a spare room and began reading one.

It featured the golfer Ken Venturi and his comeback from a tough life and a mediocre golf career to win the US Open, a magnificent riveting story spread over many many pages.

I asked the unfortunate owner if I could borrow the magazine so I could read the story again.

He was very reluctant to lend.

My father realised his insensitive callous son was about to say, hey, you won't be needing it, and he intervened just in time.

Roy will look after the magazine, he said.

That was my introduction to the American way of sports writing, which is invariably swamped by melodrama and hyperbole, mammoth setbacks and disbelievable recoveries.

But oh so readable.

I have yet to read a better sports book than Laura Hillenbrand's Seabiscuit, and my runners-up in sports book writing are dominated by Americans, David Halberstam most of all.

Last week's coveted op shop purchase at an absurdly cheap price was a 1958 first edition Great Stories From The World Of Sport, edited by Peter Schwed and the doyen of American golf writers, Herbert Warren Wind - 1200 pages over three volumes, and, I see, still available from online book outlets.

It is a wonderful collection, filled with pieces so much better for sheer writing than for who played, who won or who lost.

A miscellany not of sports writers, but of writers writing about sport.

The editors choose Tolstoy as the finest writer on sport ever, and include Conan Doyle, Hemingway, Dahl, Runyon, de Maupassant and, heretically, Wodehouse, who dares ask if ''the pestilential past-time of golf is of any USE''.

I have been draining these books for a week, particularly delighted to get the full novel Bang The Drum Slowly, by Mark Harris, from where the movie came, Robert de Niro's first and still one of his most brilliant.

The excerpt from Evelyn Waugh's Decline And Fall, so good for the boys, split me in two with laughter and awe.

No, I had not read Decline And Fall; yes, I will read it now.

There has never been a sports day like this one.

The teacher Pennyfeather is sent in disgrace, an indecency charge, to Llanabba, a school so lowly the only other teaching applicant was deaf.

On sports day, 10 men of revolting appearance, low of brow, crafty of eye and crooked of limb, advance with the loping tread of wolves.

This is the school band.

Food for thought there.

The great critic, philosopher and essayist William Hazlitt, writing on the death of the fives player John Cavanagh 200 years ago, fives being the only sport I managed to weasel my way into the Otago Boys' High School annual prize list, though they forgot to organise a prize so I never got to walk across the Dunedin Town Hall stage, yes, John Cavanagh - ''When a person dies who does any one thing better than anyone else in the world, which so many others are trying to do well, it leaves a gap in society.''

Now this is sport.

But for bringing any craft to its cul de sac limit, to perfection, it could be anyone, from Vermeer to Jimi Hendrix.