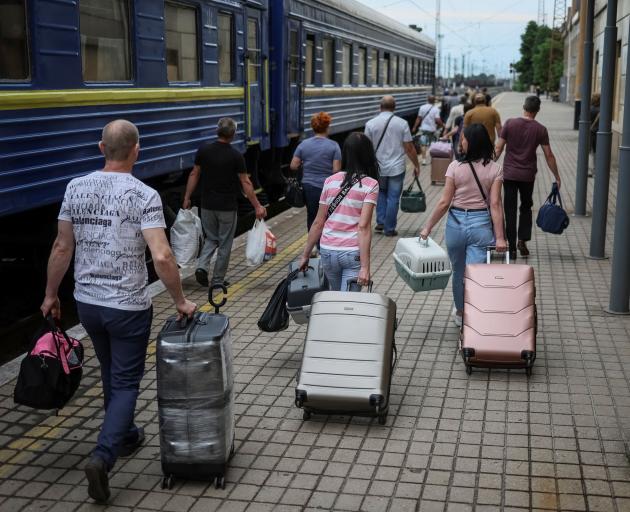 Ukrainian refugees prepare to board a train as they evacuate from war-affected areas of eastern Ukraine. PHOTO: REUTERS
DEAR Uncle Norm

We should launch a super-charged refugee plan targeted towards the millions of valuable Ukrainians displaced by Russia’s invasion.

New Zealand is haemorrhaging skilled workers. Our yearly "immigration" is actually minus 7300 and getting worse fast.

Many, many thousands of the Ukrainian refugees who desperately need homes are exactly the people we need to replace those leaving us. They’ve worked in a relatively modern economy, are well educated and have cultural values like our own.

Our reaction to the Ukrainian refugee crisis has been abject. We’ve offered extra "family" places to the 1350 Ukrainians living here. Sterling application of red tape has kept arrivals down to just 150.

Morally, this is pitiful. Economically it’s crazy. What can be done?

It seems hard-nosed to mix a refugee disaster with opportunity. But this crisis needs both moral and an economic honesty.

It is difficult to take in the full misery launched by this newest chapter of Russian military aggression.

Their bloody putdown of the 1956 Hungarian rebellion created 170,000 refugees. Twelve years later, when Russian tanks crushed the Czech uprising, 70,000 escaped that country. The brutal Ukrainian onslaught has already forced 5.1million (!) to flee their homeland, with many more to come.

Wars end with treaties. But Russia’s burnt earth military strategy means many refugees and citizen soldiers will have little but dust to plod home to. This is different to Hungary and Czechoslovakia, which weren’t laid to waste, because they were so quickly smashed.

Our immigration is better at keeping people out than letting them in. Ukraine’s victims offer even the slightly imaginative a chance to throw out inhumane rule books, and act fast. (Did we learn nothing from the MIQ rights disaster?)

New Zealand is short of doctors. Ukraine has a third more per head than us. There are 290,000 Ukrainian nurses and medical support staff. Engineering sits in the Ukrainian bloodstream — they have 150,000 of these prized pros. There are 300,000 IT workers, and 1.3million teachers in kindergartens, schools, universities and tech colleges.

Many thousands of these valuable, motivated people will desperately need the "favour" of new homes and new countries.

Yes, there will be back-end issues like language training, temporary benefits, and short-term accommodation. But giving in to these is like rejecting a gift Mercedes because you’re asked to shoulder the first year’s rego.

Kiwis get snotty about Australian refugee management. But — big picture — that country does far more for refugees. Australia took in 15,000 Hungarian revolution victims. (New Zealand managed 1100). Six-thousand Czechs (New Zealand, fewer than 200). Three thousand Ukrainians have already passed through Australian immigration on humanitarian visas, and another 3000 have their papers — compared with our 150.

In my early Sydney days I lived in a smart little flat that Hungarian refugees had knocked together in the back part of their house.

Frank and Ilena Woog weren’t notables. They pronounced their surname "Wog" and, because it seemed indelicate to question this, they were known to me as the Woog-Wogs. There were four of us — Frank and Ilena, myself, and their enormous Alsation, Max.

Max stood noisy sentry to burglars, gas meter readers, and Watchtower missionaries. In his stand-down time he was a vigorous crotch sniffer, who delivered binding judgements on dinner guests and girlfriends.

Frank was an engineer, and the Woogs were stolid, conservative East Europeans. Myself — I was an ambitious Kiwi journo, not well off, but come for the larger challenges.

We had zilch in common and we got on famously — in no small part because their refugee journey taught them kindness and made them appreciative Australians.

When we see the TV refugees’ wearied faces and battered baggage we can forget that just a few days earlier they were very like us. With careers, families, skills, and financial worth.

If Australia can manage it yet again, can’t we use a little flair and imagination to sort out answers? We recently unearthed 6500 hotel rooms for MIQ. Socially, we waste so much on the habitually entitled. About 5000 patched gangsters are paid major benefits that could be better placed with more deserving people.

Ukraine’s crisis won’t finish quickly, so we have a little leeway for preparation.

(Only kidding re: the gangs, and the habitually entitled. Sort of).

--  John Lapsley is an Arrowtown writer.