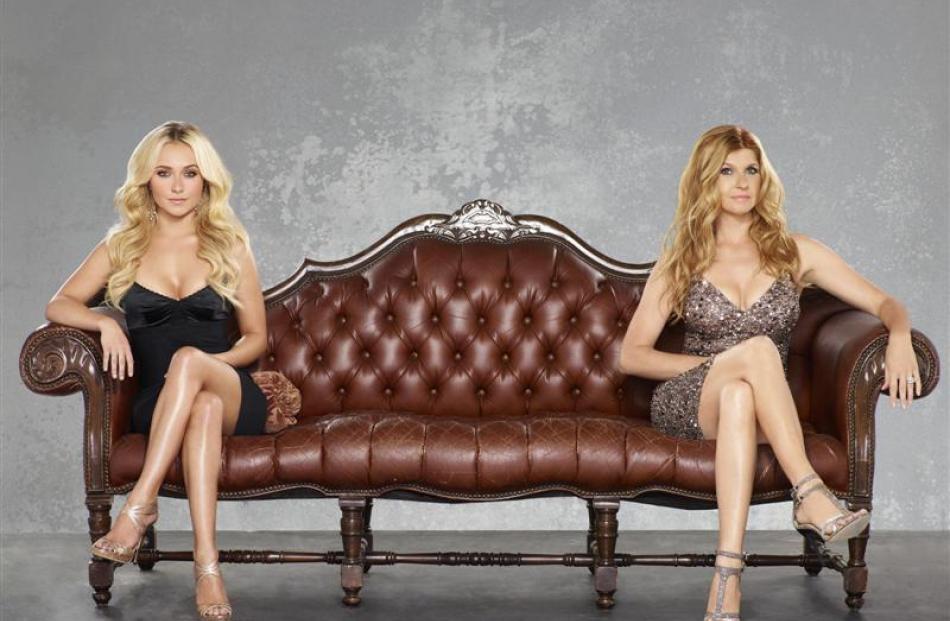 SPOILER ALERT: The following column might give away hints about what will happen in the television show Nashville.

A close personal friend brought me back the first series of Nashville a couple of weeks ago, unaware it is already up and running on mainstream TV here.

And it is. Much of the time, not all.

But the series is bilge.

Still, I have watched all 19 episodes at high speed.

Why do we watch bilge?

Or, to be kind to the general population, why do I watch bilge?

Nashville is night-time drama, which means it is a daytime soap opera shown at night.

Every character is beautiful.

Even the mayor, who looks like the kind of actor Hollywood has to find these days to accompany Jennifer Lawrence.

Which means they all sleep with each other, as soap rules say nobody with a face like a blind cobbler's thumb or is dumber than a dog's foot can ever have sex.

The series is hung on two competing country stars, Rayna, who is deteriorating famous and hanging on grimly to beautiful, and Juliette (whose mother is a junkie called, good grief, Jolene), who is rising famous and already beautiful. Interestingly, both actresses sing like bellbirds.

Are they miming someone else?

I am dumber than a dog's foot, so I wouldn't know.

Then there's beautiful Scarlett, she had to be called Scarlett, not even rising famous but still rising, whose voice is a weird hybrid of Tennessee mountain-cabin Dolly Parton and remote dairy-farm Australia.

But wait there's more; the actress who plays Scarlett is Australian.

You have to love the way she does an American country accent.

Scarlett writes poems which become song lyrics with the music of beautiful raw hunk Gunner, it could be spelled Gunnar, I haven't checked.

Scarlett isn't with Gunner in the rumpy-pumpy sense; she is with beautiful Avery, who looks like Tom Cruise, OK, you are allowed to disagree Tom Cruise is beautiful.

He is the J. R. Ewing all soaps have, more evil than a razor blade in a biscuit.

The children of Teddy - he is the mayor - and Rayna - yes, Rayna is married to the mayor - are Maddie and Daphne, massively talented whenever they sing, which is sadly not often, and impossibly young, though Maddie occasionally looks 22.

They would win America's Got Talent even if they filled their mouths with glue.

But who is Maddie's father?

And finally, well not finally, there are a bunch of characters, all beautiful, and in true soap lingo, one is called Coleman Carlyle, we have Deacon, who is haggard declining beautiful after eight spells of rehab.

Nashville is shot in Nashville. I have been to Nashville.

I have been to Ernest Tubb's record store, watched amazing singers changing spots every hour in small cafes, playing only for tips, and lunched in a star-filled restaurant with a man who was managing Keith Urban.

He ran Atlantic Records and gave me a bunch of Urban CDs which I later put in Records Records.

They sat untouched for months.

Who would have known Keith would marry Nicole Kidman and judge American Idol?

I should also add Nashville has a magnificent and colossal discount shoe warehouse walking distance from Music Row. Don't pshaw, shoes are important.

ANYWAY, I picked up a lot of ear-opening stories about the music business there; the series seems pretty accurate.

But ultimately, Nashville is bilge.

If the absurd political mix that is the Internet-Mana party swear they will abolish bilge television, then they will get my vote on September 20.

I say that without shame.

Until then, who IS the daddy of Maddie?