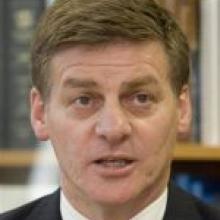 Bill English
How will Finance Minister Bill English handle unhappy news next Tuesday when Treasury updates its Budget forecasts, as it is obliged to do before next month's election?

Without an iota of ignominy.

He follows the time-honoured practice of governments to own the achievements and disown the failures.

On past form, Mr English will turn Tuesday's bad news to his advantage, reinforcing the need to maintain National's course - to keep a tight rein on public spending, to cut long-term welfare dependency, to keep borrowing down and savings up.

And he will use the gloomy news to paint high-cost policies by other parties as profligate and irresponsible.

The inevitable decline in growth forecasts will be blamed on events beyond his control, in Europe, the United States and Canterbury.

It may well be the last time the electorate gives National a chance to blame someone else, or somewhere else, for worse outcomes than those promised.

National's veritable Southern Man has emerged from his first term as finance minister as a dependable, safe pair of hands, having weathered a ministerial housing scandal early on.

The pressure in a second term would be greater, and much of it self-imposed.

Mr English has made it clear National won't budge on its commitment to get the books back into surplus in the 2014-15 year.

If the summit in Europe at the weekend over Greece's debt crisis fails to deliver the leadership required and the world is back in recession, an uncompromising track to surplus could require greater cuts in public expenditure and a risk of choking the recovery.

None of this will be a risk for National before the election, but it could turn ugly after it.

Amid all the uncertainty, there is one certainty: if National wins a second term, Bill English will still be finance minister.

The only alternative is Steven Joyce. There was speculation earlier this term when Mr English was mired in a ministerial housing scandal and Mr Joyce's star was rising that Mr Joyce would step into the finance role for any second term, but that has long since evaporated.

Mr Joyce could well move into the economic development and science and innovation portfolios.

But there would be no question that Mr English would keep finance.

Any challenge of that notion is from opposition parties playing to the media, or by the media looking for some spicy conflict. But it is not an issue in National.

There is no reason to break what has so far been a highly successful partnership between Mr Key and Mr English.

The partnership began as a negotiated one, not a natural one, back in 2006, when Mr Key was set to fill Don Brash's vacancy as leader.

Mr English led a small but important faction in the caucus, including Simon Power and Katherine Rich, who had been disaffected after Dr Brash ousted Mr English - some say with Mr Key's vote, though he denies it - and they needed to be part of Mr Key's team, not an adjunct.

In Mr English, Mr Key had a deputy who had the things he didn't: experience in politics, an abiding interest in policy development and detail and National Party blood running through his veins.

Mr Key's inexperience - leading the party after just four years in Parliament - turned out not to be a major disadvantage because he learned so quickly.

But each of their talents still complement the other's: Mr Key is the out-there optimistic, socially liberal, rather poll-driven leader; Mr English is the laconic, understated, socially conservative, intellectually robust deputy.

The angry "bitter Bill" of opposition days disappeared with the acquisition of real power, probably more than the Prime Minister, and an acceptance that he will never be prime minister.

Mr English is the one with the plans, the quiet reformer, who is steadily reshaping the public sector to make more room for the private sector in areas of government, be it in the management of prisons, the administering of social housing or the ownership of state assets.

The fiscal pressures have given Mr English the political scope to reshape the public sector in way he would like to have done, even if the global recession had not happened.

There has also been a pattern to the way reforms are developed under National - set up a task force, appoint people of high credibility but who are likely to deliver the sort of result National wants, issue discussion documents and interim reports along the way so there is no shock at the end result. Respond. Implement.

John Key's legacy to National has been his ability to deliver power through popular leadership; Bill English's legacy will be in the way he has exercised power.