Original lyrics jolt after a lifetime of misinterpretation 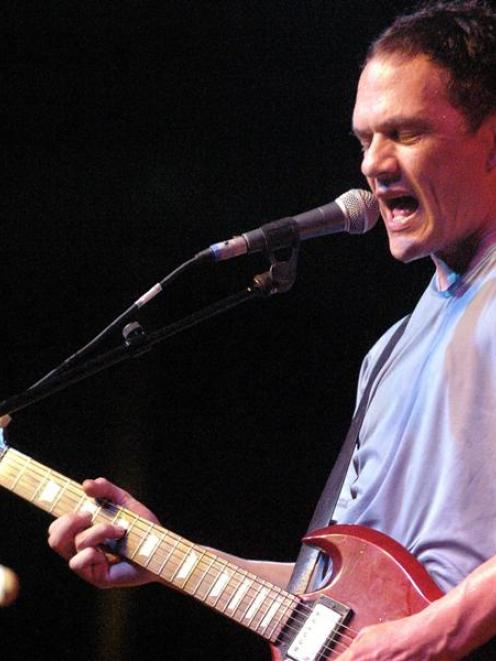 Shayne Carter, with Dimmer, plays in Dunedin in 2005. Photo by Craig Baxter.
While the city was being roasted alive over the closing days of January, confirming for the cynics and curmudgeons of the north that Dunedin is in fact the sunniest and warmest city in all of New Zealand, I was slaving over a computer keyboard indoors transcribing, copying and pasting the lyrics of the 23 songs to be performed in the upcoming ''Tally Ho!'' town hall concert.

Those clutching a programme on Saturday, February 28, will perhaps be quite surprised as they run their eye over these lyrics, though probably nowhere near as surprised as me, as I am one of those people who, despite having perfect hearing, unaffected by a lifetime in rock music, have been mishearing lyrics all my life.

This possibly means my neurological ability to invent is simply stronger than my physical ability to hear, but whatever, I was stunned to read the lyrics of these songs I have been tra-la-la-ing to myself for the past 30 years.

I go no further on this topic than the work of Shayne Carter.

Now Carter is in the New Zealand Rock'n'Roll Hall of Fame and is incontestably one of the finest songwriters we have.

His masterpiece, She Speeds, which he will sing at the Tally Ho! concert with the Southern Sinfonia driving him into the audience from behind, was the only Dunedin Sound song that made it into the Apra Best New Zealand Songs top 10 in 2001.

Carter and I were once in Wakari Hospital together awaiting operations, him appendix, me gall bladder.

I took this opportunity, standing on the brink of death, to have some serious musical discussion.

I told him his line in the Bored Games song about Marilyn Monroe - ''I sit and watch at many a door'' - was so astoundingly bad that I believed it could possibly be the worst line ever written in the history of New Zealand music.

He looked at me long and hard and replied that the line was - ''I sit and watch and really adore''.

The meaning of some of the lines in She Speeds had not made it to the bright spark bit in my brain, so it was in this period of lyric transcription that I decided to sort that out.

''And I quietly bound with the dawn, hey man, a number that is bounding beyond.''

After a lengthy silence during which I could almost smell his incredulity, he replied - ''And I quietly count with her gone, name any number and I'm counting beyond.''

Really? I quickly countered with ''Caress without a neigh''.

I had always loved that seamless slide into horse metaphor.

''Caress one night away,'' replied Shayne.

Because Shayne is a close friend, I am privy to a host of incidents I swore on my dog's grave I would never mention in public.

Like the time he appropriated some cheese from a place where they charge you money to appropriate cheese.

''Love the way you worked in that cheese thing, Shayne,'' I wrote.

''Elusive as a thief in the night,'' he countered again.

Good grief. It seems I have been loving this song for the wrong reasons for 27 years.

What to make of all this?

Does Shayne write in Esperanto?

Or is he merely like so many rock singers who sing as though two goblins are fighting inside their mouth?

Maybe the singing at Tally Ho! will be clear as a bell.

That was certainly one of the intentions when this concert was lashed together and people who can really pronounce words properly, like soprano Anna Leese, were brought in to show the public how good these songs really are.

I reckon Shayne Carter should sing my words to She Speeds at the town hall, not his.