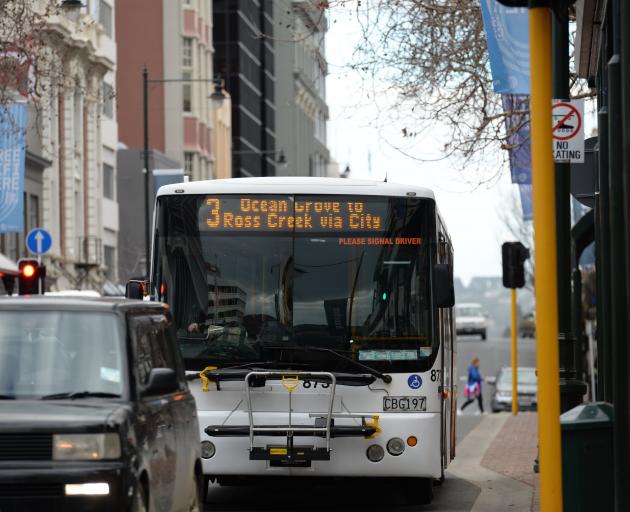 Photo: Linda Robertson
How can Dunedin have a better bus service that at least breaks even? City councillor  Andrew Whiley has a plan ...

I was glad to read (ODT, 27.8.21) that the $2 city bus fares would remain for the foreseeable future. With Generation Zero calling for $1 fares, I would have to agree with Cr Michael Deaker, of the Otago Regional Council, that cheaper fares are not the "be all and end all" with regards to increasing patronage.

He also commented on the financial implications of the $2 flat fare, calling it a "bleeding wound" and a "burden".

ORC staff stated that the $2 fare was producing a loss of about $98,000 per month, or $1.174million annually, from lost patronage revenue.

I am concerned about such a loss and who makes up the shortfall. More importantly, how can Dunedin have a better bus service that at least breaks even?

Back in May 2021, I made a personal submission to the ORC hearings panel, focused on the future of the bus service in Dunedin. This piece covers off many of the key points I made about how Dunedin could have an effective bus service that is essentially user pays. I do not want to see a bus service that is underwritten by Dunedin ratepayers; rather I believe that we need to get creative and work on solutions to get more guaranteed patrons on the buses.

So, who are the biggest potential bus users in Dunedin? It is the workers and students.

Focusing on the students first, I believe the university and polytechnic students are major players, but we don’t have a service that is attractive to them. In talking with many students, they are keen to use the buses, but they are not keen on paying as you go as they are often on a fixed income, and they don’t feel the service is fit for purpose. However, if the university and polytechnic collected $120 from each student built into their student fees for an annual bus pass, this could create $3million revenue upfront (based on 25,000 students). With this revenue, bus company contracts could be funded to increase the frequency of student-friendly schedules and widen the route networks.

This could also solve the issue of the hundreds of cars that students bring to town because they feel they need them at their flats. Many of these vehicles are parked Monday to Friday and only moved occasionally on the weekends. With this prepaid bus service entitlement for every student, we should see many students actively taking the bus to class, doing their shopping and visiting other parts of the city (perhaps even knowing that their transport costs are covered and with an expanded service including study-friendly efficient routes — we might even see them being able to live outside the current student zone).

From my discussions, students want a bus service they can use like Uber and the ORC has responded with real-time tracking with the Transit App, introduced at the end of April.

This gives everyone the ability to track a bus and determine how far it is from their stop. It has been a definite improvement, but unfortunately, many students do not realise the app exists as they aren’t using the buses regularly. Many have given up as the schedules don’t work for them.

My submission also talked about engaging with all major employers in the city, such as the Southern District Health Board, university, polytechnic, Dunedin City Council, ORC, Ministry of Social Development and ACC to encourage them to provide all staff with this type of bus pass. A pass could cost $200 per annum per staff employee and could be fully funded (or even 50%) by the employer.

I believe offering this bulk arrangement would not only increase bus patronage, but also encourage a modal shift and assist in funding a more efficient and effective bus service. However, it is the convenience and efficiency of the service that is critical. So there needs to be engagement with the major employers to review bus timetables to ensure that they are suitable and co-ordinated to work in with hours for shift changes and shift start times at the hospital and other businesses, in order to make the service attractive and practical.

Based on these additional revenue streams, I would like to see this result in a free ride service around the CBD, to be used by anyone.

For example, the area would be from Jervois St to the south (Salvation Army Store to Spotlight) through to Albany St to the north (Rob Roy Diary), across to Logan Park and the Stadium, Anzac Ave, to Cumberland St to the east and Princes St, George St and up to Moana Pool (thus including Otago Boys’, Otago Girls’ and Kavanagh).

This would encourage more people to use the bus and work as an efficient mechanism to navigate a large part of the city and could be modelled on the free tram service in Melbourne. Locations like Otago Museum, the train station and Toitu Museum could be easily accessed through this enhanced inner-city network.

As an example, I can envisage workers at John Wickliffe House hopping on a free bus and going to shop at Meridian Mall, and then grabbing some lunch before taking the free bus back to work.

This could work, especially if the St Clair to Normanby route was modified to travel through the centre of town along Princes St, the Octagon and George St. Ideally, this would be a regular service, travelling every 10 minutes, which would remove the need for the DCC to further proceed with a loop bus service.

Other bus services/routes could be offered, such as providing after-school services to locations like the Edgar Centre and Logan Park, which would reduce the after-school sport traffic dilemma faced by many parents.

For the hundreds of workers in the wharf area, a regular loop service leaving from the bus hub and moving through this industrial area, dropping off and picking up workers could benefit many.

I also suggested that we could provide an enhanced Mosgiel express service but include a stop at the Sunnyvale Sports Ground for parking, which could negate having to build a separate park and ride facility at Burnside. I believe Sunnyvale has lots of available parking Monday to Friday and offers a more seamless service, as it would be more convenient for buses to get on and off the motorway.

In consideration of the governance of the bus service, I suggest there should be joint governance between the ORC and DCC, to ensure that the service meets the demands of our city’s residents. These and other creative funding options would not require it to be underwritten by ratepayers if we can get the support from the employer and education entities.

Ultimately, we need to have a bus service that we are all proud of and that everyone enjoys using and the only way to do this is to make our current service better. And that means enticing and supporting more people to get on those buses.

Some novel thinking here, I think there is certainly some value in these ideas. There is even the potential for a healthy surplus with enough buy in from tertiary institutions and large employers. As long as any surplus was reinvested in the system by increasing frequencies and routes there would be potential for a positive feedback loop. This could even potentially get the system to a tipping point where for many people using buses would be far cheaper (or free) and more convenient than driving around town.

Try timetabling buses so that people don't need to run 5 blocks to catch it at 5.00pm (not everyone can just drop everything and run), and install screens at stops so that you know if you've *missed* your bus. Also, if you could get the driver to actually stop, rather than leave you standing in the rain at 10.00pm, that would be awesome. Right now I don't trust the bus system to get me to work on time, or home at all.

A couple of points about the bold plan.
Very few public transport schemes anywhere make a profit or break even. But somehow it is assumed a small population such as Dunedin's has the volume of potential users to run a profitable system. Maybe if you banned all personal car use you might increase patronage, but make money? I doubt it.

Taxing students, then thinking having paid a tax they will want to ride on buses is just idiotic. You assume that all students live so far off campus they need to ride transport. Some do, many don't. Taxes for no return is normal but a bad idea.

The idea that workers from the exchange area would want to catch a bus to go shopping at Meridian mall just doesn't work. Some people have an hour for lunch, many less. Even if you allowed an hour do the sums. 5m to get to the bus stop, 5 min average to wait for the bus, 10 mins drive to George St. Double that to return and leave 20 minutes at most to buy and eat lunch and then supposedly shop.

And that was before some clowns voted to make George St one way so buses will take even longer.

So great article, just ideas that aren't thought through.
I would write more but sadly no room.