Survivor's letter to her family says it all

Paul Gorman tries to make sense of the modern world, with your help. 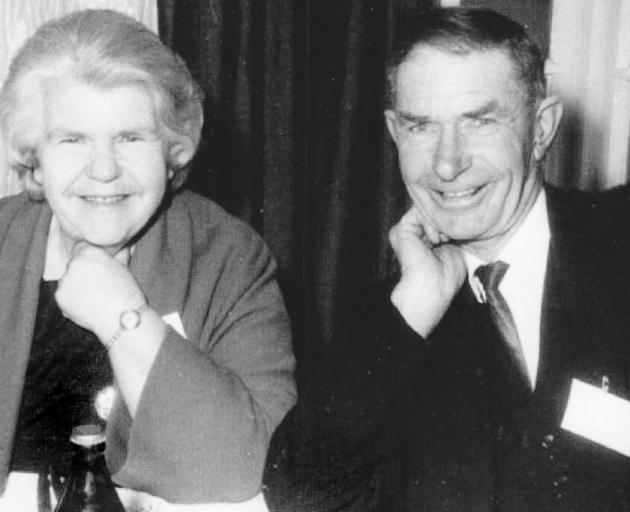 Lex Cromb, from Ranfurly - seen here with her husband, Jim, in June 1969 - was on Wahine when it struck Barrett Reef and foundered in Wellington Harbour during a tempestuous southerly on April 10, 1968. PHOTO: SUPPLIED
Another Wahine storm memory landed on my desk yesterday, one far too good to pass over. I'm really grateful to Mona and Bruce Cromb, of Green Island, for sharing this piece of personal family history with us.

It's a letter from Bruce's late mum, Lex Cromb, of Ranfurly, who, aged 57, was on the Wahine that day, travelling to the Hutt Valley to stay with her eldest daughter, Margaret, son-in-law Des and their family.

Mona explains that her parents-in-law, Lex and Jim, had eight children, who each received a copy of this letter, dated April 28, 1968. For space reasons I have had to edit it a little:

"Well, I intended writing a fortnight ago but I don't know where the time has gone. I guess you would all like to know what it is like to be shipwrecked!

"I boarded the Wahine at Lyttelton and went straight to bed, as I knew no-one travelling, and did some knitting on a singlet. After the ship had got well under way there was a knock at my cabin door and I thought it would be my cabin mate, and it was. What a shock we both got - it was a man! I felt so sorry for him - he looked so embarrassed to see a woman in one of the bunks in his cabin. However, I showed him my ticket which said that was my cabin. He got a steward who also looked at my ticket and then found the poor man another berth.

"Well, I slept pretty well and in the morning thought we had had quite a good crossing (my cabin was about the centre of the ship on "C" deck). I lay awake for a while and, as my watch had packed up on me, I had no idea of the time. However, I heard dishes and thought my early cup of tea would be along shortly.

"I waited, but before getting it the boat rolled and there was a crash of crockery. I never did get that cup of tea! I eventually decided to get dressed. It certainly was an effort with the rolling of the boat but I thought nothing of it and when we hit Barrett Reef I really thought it was the boat bumping the wharf.

"By this time I was dressed, thank goodness, because soon the call came over the tannoy for all passengers to don lifejackets. I promptly put on my cardigan and coat and then lifejacket, and joined the line of passengers making for "B" deck, where we went to the lounges.

Lex would have been carrying tickets like these. PHOTO: SUPPLIED
"There was no panic as far as I could see. This was about 6am or 6.30am and the ship was on an even keel although rolling a bit still. I got a chair in the lounge by a window and that was the first I saw of the weather and mountainous seas. Also that was when I discovered we had hit the reef. We just sat there all morning doing nothing - just talking - until about 1.30 pm, when the order was given to abandon ship.

"It was a long morning and I wished I had taken my knitting with me. All I took was my handbag. They gave us a cup of tea about 8 or 9am with slices of corned beef and ham. Some got a slice of bread and butter too. Later we got a banana and later still a pottle of ice cream and a bottle of soft drink. They couldn't make us more tea because all the water tanks had been pumped out to lighten the ship.

"We were told sometime the ship was off the reef and had drifted into the harbour. She was holding a pretty even keel all the time so I was not worried. The tug came out and got a line aboard but it broke and they couldn't get another on account of the roughness of the sea.

"The next thing the ship listed well to starboard, came back a bit, then listed again and stayed that way. I believe the cargo shifted. It seemed to me the deck was at about a 45-degree angle. This was when the order came for the passengers to go to the starboard side and nobody seemed to know which was starboard!

"It was rather difficult getting out on deck, you just couldn't walk to the door. However, I pushed my handbag between my lifejacket and chest and started off to crawl on my knees, hanging on to table legs to stop sliding down to the other end. I got to the last tables and wondered what I could do, but a man held out a helping hand and pulled me the last bit.

"Eventually I got out on deck where I dispensed with my shoes, thinking it would be better in stocking feet. It was wind and driving rain but I was too busy hanging on to even think about it and this was also enough to keep out terror and panic. I got down to the starboard side and looked at the water, and although people to right and left were jumping overboard, I found I just couldn't do it. So I just stayed there.

"Then a life raft was thrown in and people were jumping on to it. But again I just couldn't. Thought I would miss and land in the sea. Saw one woman floating past who was drowned even then.

"Anyway I just stood there waiting and watching. Goodness knows what I thought I was going to do but I didn't feel the game was up and I didn't feel any terror. A lifeboat came along and I started to climb the rail and a couple of men grabbed my arms and pulled me in head first.

"I stayed with my head down until people stopped jumping in around me and we were away from the ship. Then I surfaced and had a look around. My good angel must have been looking after me on that day because I had missed one other lifeboat and the one I caught (or caught me) was under the control of a seaman who knew his job well. He turned her tail on to the waves and with the help of the waves and the men rowing we soon landed at Eastboume.

"We landed at Eastbourne about 3pm and were met by a bus and ambulance. When getting out of the lifeboat I was at the bow and had to jump about six feet. Like a silly, I bent down and took the hands of two men and of course was off balance and half-fell, half-jumped down, and fell taking the men with me just as a big breaker was coming in. I remember wondering if I was going to be drowned after reaching land. However, we made it to our feet and I only got wet from the waist down and the arms.

"The bus took us from Eastboume to Wellington Railway Station where they gave us a blanket, took our home address and sent us into the dining room for a bowl of soup, a slice of hot buttered toast and a cup of tea. It was lovely and warm in there too and I took the opportunity to comb my hair and that made me feel better.

"Next I went to a call box and tried to ring Margaret, but the silly girl in information couldn't find her number in the book. I hung up in disgust and went to the police in charge and was directed to a taxi who brought four of us out this way. I arrived here at 5.30pm and poor Margaret was almost beside herself with worry. Had a bath and was no worse off than an odd bruise or two.

"I am sure the experience was much worse for the ones on land than me, although, as I said before, I [was lucky I] got into the lifeboat I did. One got side on to the waves and was capsized. Another had a line to the pilot launch and while being pulled in was pulled under the stern and capsized.

"Think that is enough of the wreck," Lex concludes.

If anyone wanted to know what it was like on the stricken ship that day, they only need read that letter.