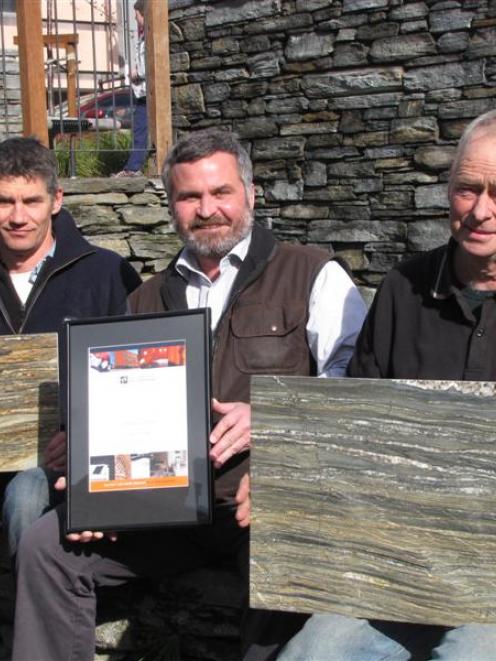 Promoting their products are (from left) Dave Grant, of Alexandra Stone, Queenstown Stone managing director Paul Sinclair, and Athol Elliot, of Kingston Rock and Ag, with two of the schist tiles Queenstown Stone is now producing. Photo by Tracey Roxburgh.
An Oamaru-based business is looking forward to a bright future after winning an award in Australia recently for schist tiles it has developed.

Queenstown Stone Ltd managing director Paul Sinclair said he saw an opportunity to create the tiles about two and a-half years ago.

After intensive research, he found large boulders of schist, sourced from quarries in Central Otago and at Fairlight, in Southland, could be shipped to China for production and then the finished product returned to New Zealand for sale.

"No-one else has ever produced schist like this - it's a very difficult material to handle.

"This is really huge," he said.

The schist tiles were shown at last month's 2009 Full Frontal Tile and Stone Expo in Australia, where they were judged best product in the natural stone category - a category including products from Turkey, Iran, Brazil, Italy and Australia.

The tiles are called Pacifica, Polynesia, Oceania and Antipodia, with the schist sourced from "the pick" of southern quarries - in Fairlight, Alexandra, Poolburn and Clutha.

Mr Sinclair said it was cost-prohibitive to produce the tiles in New Zealand and China was the only country that had the production technology.

"This is a very good news story for export in New Zealand in a recession . . . all of a sudden, with a bit of innovation, we've created [a world first].

"The response has been huge. We've got clients waiting for it in the United States, Europe, South Africa and Australia."