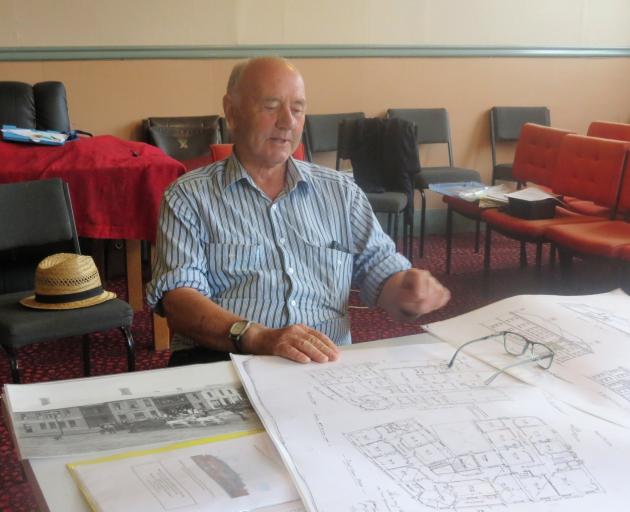 Commercial Hotel publican John Kerr looks through the building’s blueprints from the early 1900s. PHOTO: TRACIE BARRETT
Publicans John and Patricia Kerr have owned the Commercial Hotel in Roxburgh for more than two decades, but Mr Kerr’s interest in the property and the town encompasses a much longer history.

The couple have the hotel on the market but Mr Kerr said they were taking their time and in no hurry to sell.

"It should take time. It’s not like a house," he said.

History is one of Mr Kerr’s interests and he has amassed a wide-ranging collection of documents, images, books and knowledge about both the hotel and its original owners since buying the property in October 1999.

Listening to his tales of the hotel’s origin, one can understand why that is important to the couple.

The original Commercial Hotel was a one-storey wooden building in Hawick St, the side street of the current hotel’s corner site.

Named the Teviot Junction Hotel when it was established in 1863, the hotel was bought by John Beighton in 1865, and closed for repairs and reopened as the Commercial Hotel the following year.

Mr Beighton, who became the first mayor of Roxburgh in 1874, sold the hotel to Henry and Harriet Heron in 1875.

After he died in 1896,  Mrs Heron  ran the hotel on her own, having already proved her mettle to the locals and miners that frequented the area.

Originally named the Teviot Junction Hotel, the Commercial Hotel in Roxburgh has been a mainstay of the town since 1863. PHOTO SUPPLIED
Mr Kerr detailed a little of Mrs Heron’s past, a personal history that helps the  listener understand why she was many years later referred to as the "grand old lady of Roxburgh".

Mrs Heron, nee Buttress, was born in Deal, Kent, and immigrated to New Zealand as a new bride of 22 with her first husband, William Bowbyes, arriving at Lyttelton in 1858.

Mr Bowbyes drowned two years later when a boat he was in capsized off what was then the Timaru roadstead while trying to rescue the crew of a schooner that had got into difficulties in a heavy sea.

His widow married Mr Heron in Timaru in 1861, and the couple eventually joined the Dunstan Gold Rush and stopped in the Roxburgh Gorge, where Mr Heron staked a claim at the Fourteen Mile camp.

Mrs Heron joined him there and for three years was the only woman in the camp.

The Herons’ stone cottage, since restored and known as Mrs Heron’s Cottage, still sits on the banks of the Clutha River above what was the Fourteen Mile settlement.

The Herons also ran a store in the camp and bought gold from other miners.

When the gold finds became less frequent, they moved lower down to the Twelve Mile Beach camp where they opened another store, before moving to Roxburgh in 1875 and buying the Commercial from Mr Beighton.

Mr Beighton died in May 1879. In 1901  Mrs Heron  bought a building he had owned and used as a general store, drapery and dwelling near the corner of Hawick and Scotland Sts (Scotland St is now also State Highway 8).

Mr Kerr said the by then twice-widowed Mrs Heron paid £1000 for the property, a huge amount at the time.

She had obviously been an astute businesswoman, as she had blueprints drawn up for a new two-storey hotel next to the Hawick St store that same year and had it built in 1902, transferring The Commercial Hotel name to the new establishment.

The bones of the early hotel remain, including the original Kauri staircase, and the building is currently used as a backpackers. 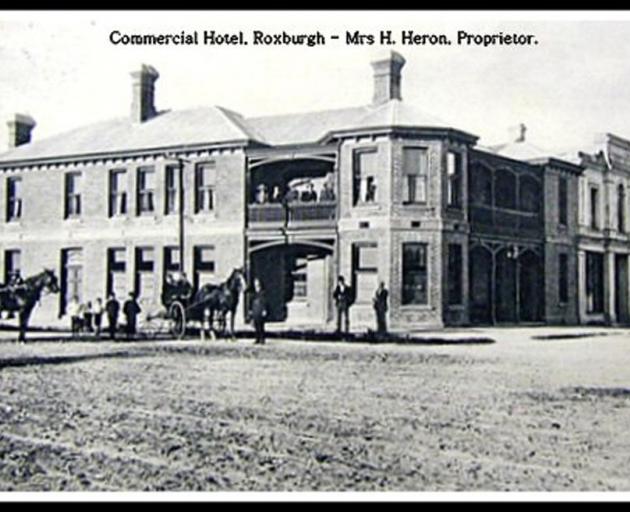 The Commercial Hotel when Harriet and Henry Heron owned it. In 1875 the Herons moved to Roxburgh and bought the hotel from John Beighton. PHOTO: SUPPLIED
The Commercial Hotel was also the agent for Cobb & Co in its early days, making it a stopping point for the mail coach from Lawrence and the starting point for coaches to Alexandra and Queenstown.

In connection with the hotel was a livery stable with stalls for 16 horses, a building that still stands on the current hotel property.

Mr Kerr said that in those days, the coach from Dunedin took one to two days, and to Alexandra was a four-hour trip with a change of horses at Fruitlands.

From Roxburgh to Cromwell was a 12-hour trip.

Among the old photos he had was one of the last gold escort coach to depart Roxburgh.

"She did a great job, even in the dingy days when it was dusty dirty roads with horse dung," he said.

An obituary for the "grand old lady of Roxburgh" in the Otago Daily Times on October 31 said she had wished to spend the evening of her days in the little town she had seen grow from a very small beginning — " a wish that was fulfilled".

Mr Kerr and his wife were selling for the same reason Mrs Heron eventually let go  the reins of the hotel she built: a desire to retire and let someone else have their time with the historic building.

He hoped that when the "right person" came along, they would appreciate the long and colourful past of the property and its former owners and do the hotel justice.