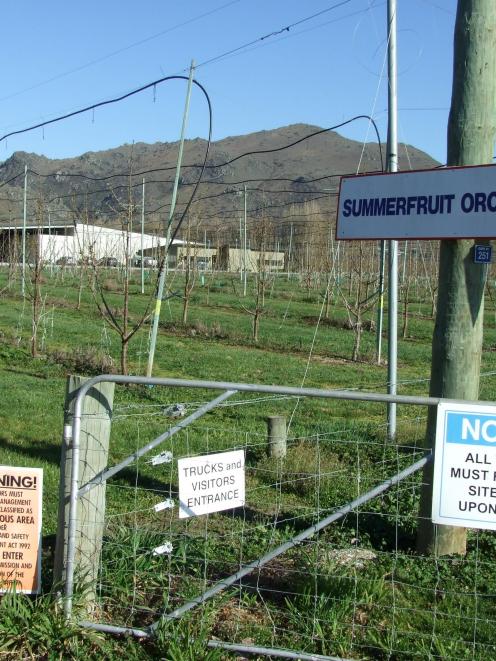 The company went into receivership in September, owing among its debts just over $4 million to SBS Bank.

The first report by receivers Colin Gower, of Christchurch, and Tim Ward, of Invercargill, has revealed the main creditors after the collapse of the company.

The receivers offered the business for sale as a going concern and Bayleys Locations Queenstown director David Gubb confirmed the operation sold after attracting ''multiple offers''.

He declined to reveal the purchaser or the price.

"It's gone to a party that is experienced in the [fruit] industry - not a local party but someone from within New Zealand.''

Yesterday, Mr Ward said the price paid for the property would not be disclosed, due to commercial sensitivity.

He believed the new owner was continuing to operate the orchard business.

The company name had been changed to EX SOL orchards.

At the time of the receivers' first report, the process of realising the company's assets was incomplete and the receivers said in the report they were unable to determine the likelihood of funds being available for unsecured creditors.

Inland Revenue was a preferential creditor, owed $187,000, and the employees were owed about $19,000, although the receivers noted that amount excluded claims relating to redundancy, as they were still being finalised at that time.

The annual report for the year ended June 2013 - the most recent one which is available on the New Zealand Companies Office website - said the company had made significant investment in new plantings and redeveloped some areas, planting better-performing varieties of fruit.

''In conjunction with this investment of capital and the higher operating costs from it, adverse weather conditions have resulted in the company and group incurring financial losses over the last several years,'' the annual report said.

At the peak of the fruit season, more than 100 staff are employed in Summerfruit's orchard and packhouse.

The receivers' next report is due on May 8.