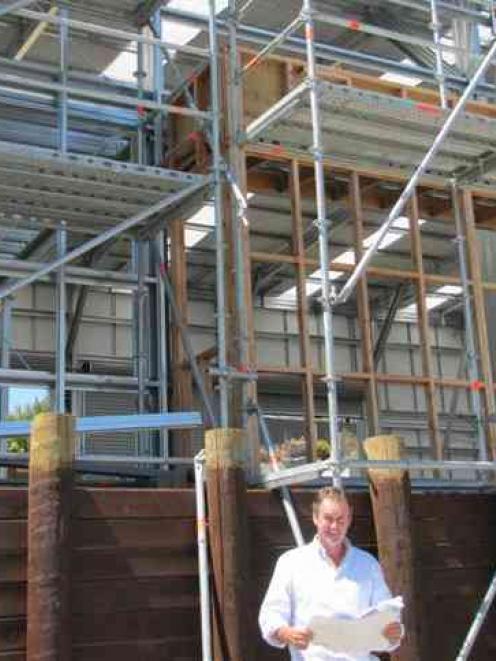 McLellan Plumbing and Heating Founding director Rory McLellan says the new warehouse in Deel St, Alexandra, being built for his company could be viewed as a leap of faith. Photo by Colin Williscroft.
A new commercial building under construction in Alexandra is a vote of confidence in the community, a business leader says.

Brent Wilson, chairman of the Alexandra and Clyde Business Group, said the warehouse being built for McLellan Plumbing and Heating in Deel St was good to see from the town's perspective.

"Things are still tough out there for businesses - and they will be for the rest of 2011."

Some businesses were still showing signs of nerves, he said.

"Things are quite sensitive, but by and large the town is doing well.

"However, any business spending is cautious, so it's good to see that sort of confidence.

"It can only be good for the town."

McLellan founding director, Rory McLellan, said work on the new 460sq m warehouse and workshop began six months ago, and it will be finished in another month.

"The warehouse component was absolutely necessary for the volume of product we sell, while the workshop facilities needed to be upgraded to comply with regulations," Mr McLellan said.

The building itself was a Kiwispan shed, with alterations designed by Dunedin architect Gary Todd.

Constructing it during a recession could be seen as a leap of faith, Mr McLellan said.

"But it [the recession] can't last forever."

Central Otago was quiet for many businesses, although his been reasonably steady.

"We were definitely hit hard though, especially work on new houses.

"In the past we could have work on 60 or more on the go at once.

"In 2010 we saw the start of a recovery, but there is no abundance of work out there.

"It is hard work finding work."

Prior to the McLellan building, the last commercial building built in the central business district of Alexandra, centred around the south end of Tarbert St, was the Colourplus building in Tarbert St, Central Otago District Council building control team leader Stewart Geddes said.

Building consent for that was granted in August 2008, he said.