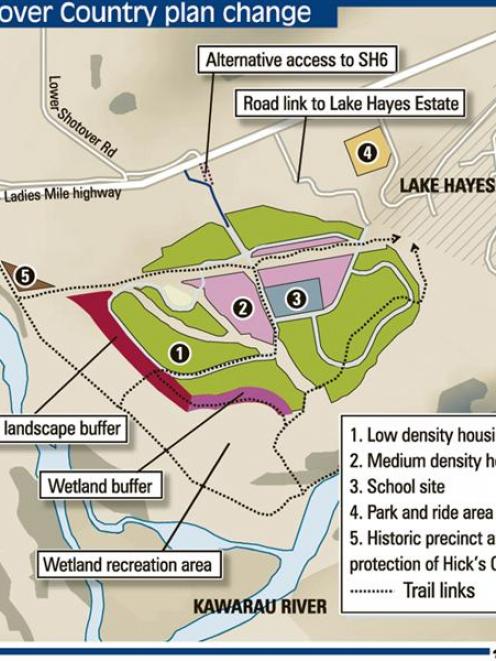 An area of rural land near the confluence of the Shotover and Kawarau Rivers would probably be developed whether or not the Shotover Country plan change application was approved, a hearing was told yesterday.

The statement came on the first day public submissions on a proposed private plan change to allow the creation of the Shotover Country development - estimated to be worth at least $300 million - began in Queenstown.

Ladies Mile Partnership, represented by lawyer Warwick Goldsmith, proposes a development of up to 750 residential dwellings.

It would feature a mixture of low and medium density development around a small commercial core and a primary school.

The original application for the creation of a special zone in a rural general zone plan was accepted by the council in April, and since then there have been 133 submissions on the proposed plan change - 112 in support, 20 against and one neutral.

Mr Goldsmith advised the panel that because the four landowners who made up the Ladies Mile Partnership already had consent to develop the land, there was a "99.9% chance" it would be subdivided privately if the Shotover Country development did not go ahead.

"There's a choice that you face today on behalf of the community as to what happens with this land resource permanently," he said.

Alongside the jobs the "$300 million plus" Shotover Country development would bring, the issue of where to put medium-density housing in the Wakatipu Basin was one of increasing significance, as land was becoming scarce.

Mr Goldsmith said there were no infrastructure issues raised by a QLDC engineering assessment that could not be solved, and ratepayers would not end up paying for any Shotover Country infrastructure.

Also proposed in the development is a "park and ride" facility, which Mr Goldsmith said had potential to offer "long-term transport benefit for Queenstown".

He acknowledged minor issues outlined in the QLDC landscape assessment, but criticised the QLDC urban design assessment on the grounds that the assessor in parts expressed opinions outside the area of expertise, and that the assessment in others parts lacked "underlying analysis and common sense".

Mr Goldsmith suggested the commissioners place "very little, if any weight" on recommendations in the council planner's report.

Shotover Country continues with its submission today, and the hearing will continue on Wednesday and Friday.