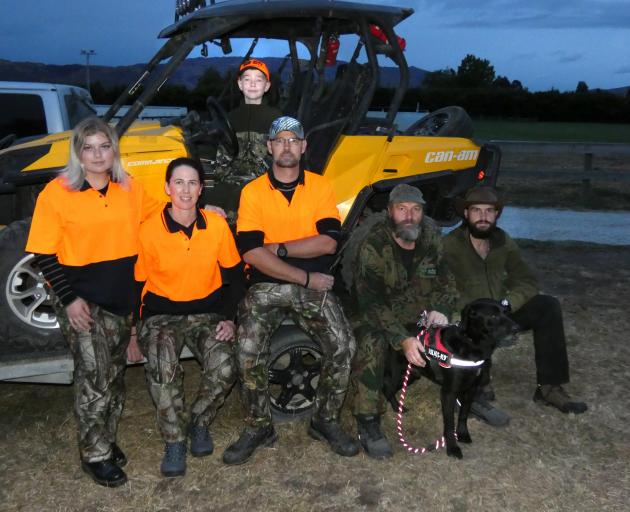 Half of the East-West Bunny Boppers team, made up of east and West Coasters (from left) Hollie Houghton, Rachael Clarke, Ruger Clarke (7), Garth Clarke, Vaughan Anderson, hunting dog Tank, and Zach Anderson ahead of the Great Easter Bunny Hunt. Photo: Jared Morgan
It had been forgotten by generations of rabbits.

But now, after a three-year hiatus, the Great Easter Bunny Hunt has been resurrected.

From 7am yesterday a steady stream of utes and 4WDs towing trailers laden with gear, plus off-road vehicles, arrived at the Dunstan Equestrian Centre near Alexandra for teams to complete registration and be assigned hunting blocks.

The blocks spread from the Cardrona Valley to south of Roxburgh and the hunters were determined to deliver rabbits a reminder.

The event, run by the Alexandra Lions Club, was cancelled in 2018 because of the Otago Regional Council K5 rabbit virus release programme then, further cancellations followed in 2019 due to an extreme fire risk, and Covid-19 hit in 2020.

Convener Dave Ramsay said this year the format had expanded from 24 hours to run over two nights, from 8am on Good Friday to noon tomorrow — Easter Sunday.

There were 8069 rabbits shot in 2017 and with the expanded format that number could easily double.

"I’m hoping we do get an impressive result because it shows the public they’re [rabbits] still out there."

Among those keen to shoot was the East-West Bunny Boppers, made of east and West Coasters.

Team member Zach Anderson, of Blackball, is a veteran and said he had come to every bunny hunt since the event’s inception 20 years ago.

Southland woman Lyn Evans said she had also attended the hunt since 2000 but her role was more that of "camp mum" — cooking for the Hokonui A team.

"They [the team] go out in the afternoon and check out the terrain, shoot a few [rabbits] of course, while I cook, and then they come back for tea."

Night was when rabbits were most active and therefore so was the team, so she kept the home fires burning with sausages and saveloys ready for when team members got back to base.

That could mean a long night because "the older ones get a bit tired — some of the younger ones go out a bit longer," she said.

Teams will return to Dunstan Equestrian Centre for the final count and shooters’ lunch tomorrow.