Clocking in for festival 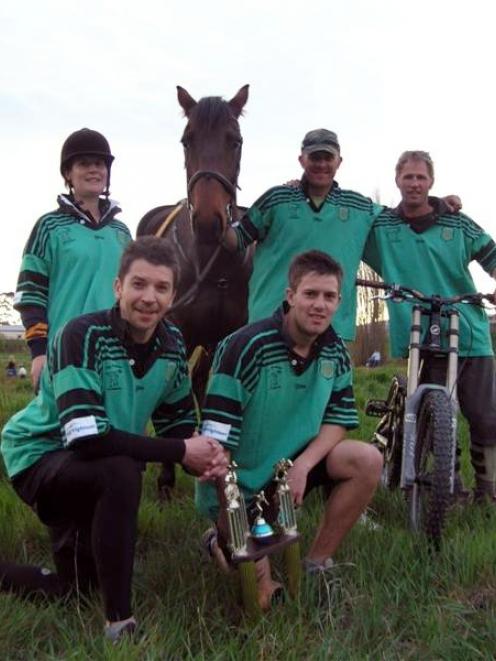 The Alexandra Rugby Club team of (back from left) Janna Mcleod, The Fonz (horse), Tim Lambeth and Dwayne Stevenson, and (front from left) Lee Wilson, and Sam Malcolm, celebrate their victory in the team section of Alexandra's Blossom Festival race around the clock at the Linger `n' Die last night. Photo by Rosie Manins.
A quirky, non-motorised race across the Manuherikia River and around Alexandra's clock on the hill heightened Blossom Festival fever last night, with athletes and animals taking to the rocky hill tracks above the town.

Horses, kayaks, and mountain bikes were used by competitors this year, who also made the most of their running power.

The annual race, which starts at the Linger `n' Die reserve near the Shaky Bridge, comprised about six teams of five and eight individuals.

Race organiser Trevor Breen said last year's team time of 4min 30sec was not quite matched, although competitors had a great race with no mishaps or injuries.

The Alexandra Rugby Club team, comprising three runners, a biker and a horse rider, finished first in a time of 5min 10sec.

Talented multisport athlete Tim Pearson, of Clyde, was first across the finish line in the individual race, in a time of 8min 7sec.

Pearson also won last year's individual race, in a faster time than he managed this year. He said the individual race was more even this year, with only one competitor riding a bike and the rest running.

Competitors, who had to cross the Manuherikia River to get to the clock and back, enjoyed a prizegiving at the Linger `n' Die after racing finished about 6.30pm.