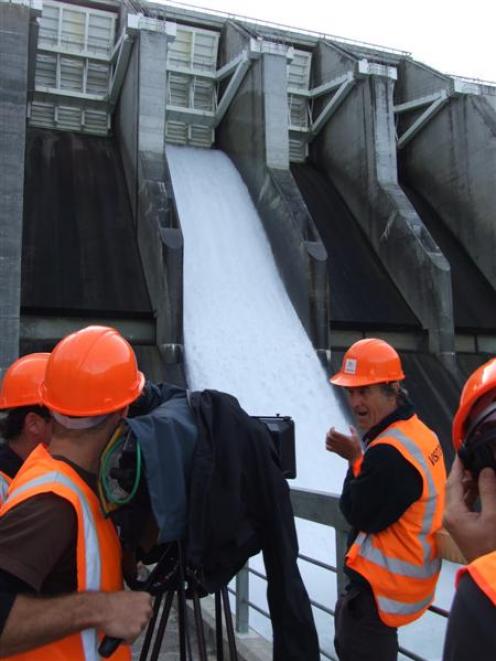 A spillway is opened at the Clyde Dam yesterday for a television documentary about New Zealand rivers. Photographer and publisher Craig Potton (centre) is writing and presenting the five-episode series, in which the Clutha River will feature. Photo by Lynda Van Kempen
Native fish such as galaxiids should be valued as much as the kiwi and other native birds, says Craig Potton, who is in Central Otago this week filming the Clutha River episode of a television documentary.

The photographer and publisher is writing and presenting the series titled Rivers.

South Pacific Pictures Ltd is producing the five-part series and the Clutha is one of four South Island rivers being featured.

"I think they've got the balance right - there's four South Island rivers and one from the North Island," Mr Potton said.

He is based in Nelson and describes himself as an environmentalist.

"The idea is to take a person on a journey, and meeting people along the way, learning about the natural history and certain elements of the river," he said.

The Clarence River near Kaikoura, Rangitata River in Canterbury, Mokihinui River on the South Island's West Coast and the Waikato River in the central North Island feature as well as the Clutha.

Mr Potton said because native fish were "out of sight", they seemed to be valued less than native birds like the kiwi, New Zealand pigeon and fantail.

"The complexity of fish life is amazing and every bit as deserving of our respect and love as native birds.

"We certainly wouldn't treat our native birds as badly as we treat native fish," he said.

The episode will cover the wider catchment area of the Clutha, including all the tributaries, and is likely to screen in spring or autumn on Prime television.

Despite claiming New Zealand was "100% pure and green", a whole range of rubbish was thrown into this country's rivers, Mr Potton said.

Dairying was taking a horrifying toll on the country's waterways but he hoped people were becoming more aware of the importance of protecting rivers.

The crew would be filming for eight days in the Clyde district and yesterday's footage included a piece about the Clyde dam.

Contact Energy opened one spillway on the dam for about five minutes so coverage of that could be included.

Mr Potton said Moke Creek's gold prospecting history and the inspiration the Clutha provided to artists and composer Dame Gillian Whitehead would also be included in the Clutha episode.

It would cover glimpses into certain aspects of the Clutha - "in a sense, my impressions of the river", he said. 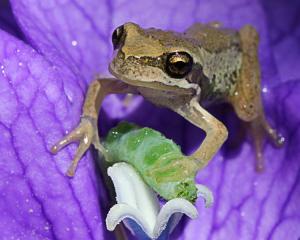