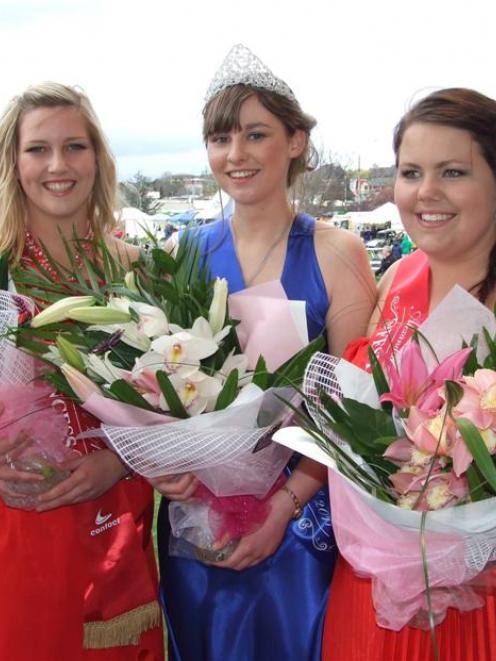 Blossom Festival queen winner Vikki Sanson (centre), flanked by second-placegetter Shaun Robinson (left) and third placegetter Paige Luff. All three are pupils at Dunstan High School and all are from Alexandra.
Despite the weather turning nasty just after the Alexandra Blossom Festival float procession, event organisers are still basking in a warm glow.

The threat of snow of Saturday, combined with a cold southerly later in the day and squally showers, reduced the number of people who viewed the parade and went into Pioneer Park. Event manager Martin McPherson estimated the attendance had dropped by about 15% on last year's figure of 10,000 people.

"All things considered, and bearing in mind we were also competing with the Rugby World Cup, we're really pleased with that," he said.

Mr McPherson and festival chairwoman Clair Higginson were delighted with the results of a survey of festival-goers on Saturday. 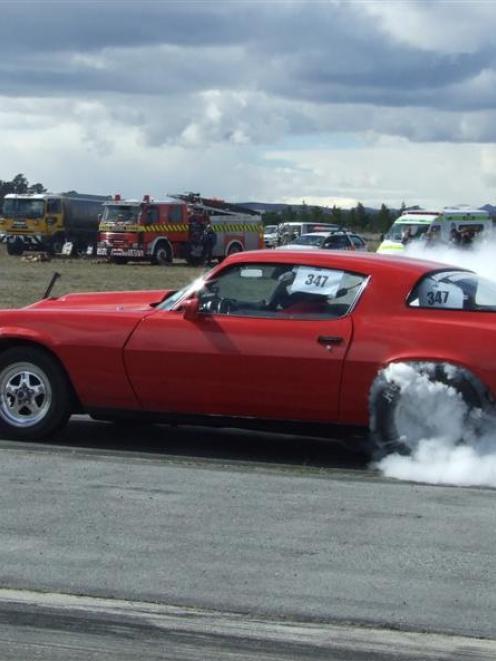 Neil Robertson, of Oamaru, revs up at the Blossom Festival Drags held on the runway at Alexandra Airport yesterday. Photos by Lynda Van Kempen.
"The response right across the board has been very positive, with people enjoying their festival experience. The only negative comment they have is about the weather on the day," Ms Higginson said.

The cold weather held off long enough for the float procession to be completed.

Taking centre stage were nine competitive floats, made up of hundreds of crepe paper blossoms, featuring themes ranging from children's books and toys through to Noah's Ark.

The winning float, judged by public vote, was the Stadium Tavern Social Club's "Kiwiana", which included a giant Buzzy Bee, complete with spinning wings. It received 795 votes. St Gerard's School's "Noah's Ark", with school pupils dressed up as animals, was only 30 votes behind. Third place went to "Noddy", entered by Alexandra Plunket. The $500 prize for the most innovative float went to "Three Miners", "Noddy" won $500 as the best floral float, and "Noah's Ark" got $500 for best school float.

"I'm super-shocked," Nikki said after her crowning. "It's all been such fun though, so I'd recommend it to anyone out there thinking of entering the Festival Queen contest."

Ms Higginson said the survey results showed most of the visitors seemed to be from Otago, Southland or Canterbury, and they were staying several days, which was good news.

Lisa and Robert Bond, of Alexandra, and their son Michael (4) were first-timers at the festival. They shifted to Alexandra from the United Kingdom in January.

The Bonds said they loved the event and their son was excited by the procession, which also included a truck parade, classic cars and pipe bands.

"Every new float that went past, he said: 'that's the one I want to win'," Mrs Bond said.

Mr McPherson said the only other weather-related "hiccup" was the cancellation of two pipe bands who were to perform on Saturday. The Mataura Kilties Pipe Band and South Canterbury Highland Pipe Band both contained a good number of farmers among their ranks who needed to check on stock because of the snow warning.

Yesterday's main crowd-pleasers were the Thunder Sunday Drag Racing on the runway at Alexandra Airport and the Asplundh Garden Tours, which included cooking demonstrations by chef Annabelle White. About 400 people took part in the garden tours, which are on again today.

The festival continues until October 14.