Collection may be too valuable to go on show 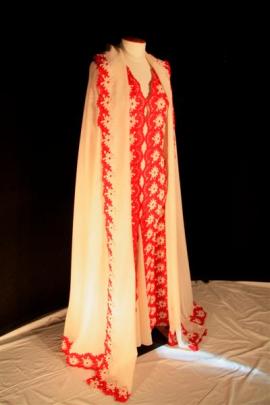 A garment designed by Vinka Lucas, of Auckland, in the early 1970s is part of the Eden Hore fashion collection. It features a cream wool hooded full-length cape with dark red daisy embroidered lace, worn with a full-length cream wool dress with red...

The Eden Hore fashion collection, bought by the Central Otago District Council for $40,000 in August last year, has gone from being a dress collection to a ''museum treasure trove'', Mayor Tony Lepper says.

He said the presentation on the collection given to the council recently made him realise the collection was more significant than originally thought.

''It's an impressive collection and the work that goes with it is bigger than Ben-Hur,'' he said.

''The importance of it as a museum piece is dawning on me; therefore it can't just be willy-nilly lent out, because we have to conserve it.

''It's certainly something we shouldn't be rushing.''

Mr Lepper said Highlands Motorsport Park had been putting pressure on the council to allow some of the collection to be displayed at its Easter meeting.

It might be too soon for that to happen, although ''conversation is still ongoing''.

A business plan was being drawn up for the collection and work was being done on branding, which would hopefully link the 1970s-'80s collection with what was happening in the merino industry now, he said.

The collection has been photographed and catalogued and is housed in a temperature-controlled facility at Central Stories museum in Alexandra while stories are written about each piece.

Mr Lepper said it was possible people might only get to see the collection digitally, as it ''may be too expensive to get it out of the bag''.

Council branding manager Shirley Howden, who has been working with the collection, said there were 276 items, including accessories, in the collection and it had been ''the largest private collection of 1970s to early '80s haute couture in the southern hemisphere''.

It included garments from ''leading fashion designers'' of the time as well as local designers such as Pat Hewitt and many were made from wool, suede or leather.

Mr Hore was a Naseby farmer and the collection had been housed on his property, Glenshee Park. He died in 1997 and bequeathed the collection to his nephew, John Steele, who was on the farm.

Mr Steel and wife Margaret sold the farm last year and offered the collection to the council.