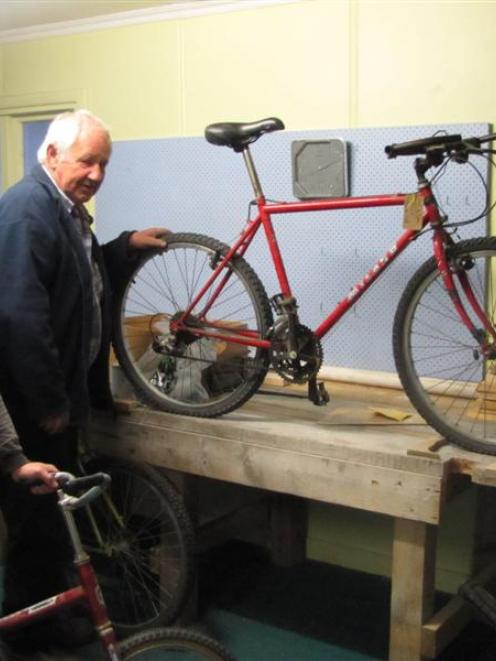 Local bike technician Jimmy Pollard, Neil McArthur, of the Alexandra men's shed group, and Thyme Festival committee member Steve Brown suss out the bikes that will be used during the festival. Photo by Sarah Marquet.
Free-for-hire bikes will be on offer to people in Alexandra during this year's Thyme Festival.

Thyme Festival committee member Steve Brown said the theme of the festival was "cherishing the environment" and it was great to be able to offer a form of transport that would "get people to think about alternatives to the motor car".

The 10 bikes have come from WasteBusters - bikes that people had dumped - which Mr Brown said embodied another theme of the festival, recycling.

The Alexandra men's shed group will give the bikes a face-lift with purple paint, and bike technician Jimmy Pollard will make sure they are fit to ride.

Helmets with purple coverings have also been donated.

Mr Brown said the use of the bikes would be an "honesty system". They will be stationed at heavy traffic points between Tarbert St and Centennial Ave such as cafes, Central Stories and New World.

He said it had not been decided what would happen to the bikes after the festival but the committee would look at using them next year and consider having them on a more permanent basis.

The festival begins on Saturday, November 12 and provides a variety of events culminating in a gala day in Pioneer Park on the 20th.

This day will include events such as a talent quest, an art sale, markets and a sustainable alley where community groups, businesses and individuals can show off their sustainable products and services.

Festival-week events range in price from free to $85 and include art and craft workshops, cooking, dance and drumming classes, and walks around historical areas.

There are also a few events for men, such as a trout and salmon filleting class, and Beer and Bunnies; a beer-brewing, and rabbit-skinning and stewing class.