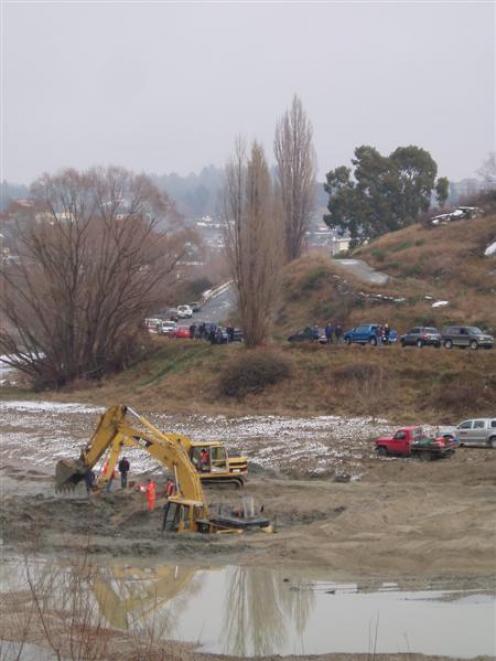 The $300,000 excavator, owned by Bamford Contracting, of Cromwell, was being used to remove sediment from the river at Alexandra when it became stuck on Thursday.

Company owner Graham Bamford said retrieving the digger took only a couple of hours on Saturday, and was a relatively simple operation.

"Getting it out was the easy part, but we'd put in a day's preparation work before that," Mr Bamford said.

Contact Energy lowered the river, by keeping Lake Roxburgh low, to assist with the exercise.

Preparation work included placing a metre of gravel all around where the machine was stuck so the heavy machinery salvaging the digger would have a stable platform to work from.

"That was all helped by the fact that Goughs mechanics [from Cromwell] managed to get the digger going so that helped immensely. If we couldn't get it going, it would have been much harder to get out and it would probably still be there."

Spectators lined the road nearby to watch the rescue take place.

"It was pretty much the biggest show in town that day," Mr Bamford said.

There was no damage to the digger during the retrieval and it would be sent to Dunedin to be stripped and cleaned.

He was grateful for the expertise of Steve Rout Contracting, of Queenstown, which also provided the heavy machinery to salvage the digger.

Other contractors had also offered their assistance, which was much appreciated.

Bamford Contracting had been contracted to remove 50,000cu m of gravel from the Manuherikia, work that was required as a condition of Contact's continued operation of the hydro-electricity dams on the Clutha River.

The project was almost finished when the digger became stuck.

"Now, we've got a day's work to tidy up the site and hopefully we won't leave another digger there," Mr Bamford said.

As it was working on the project, the company had been asked to look out for two old gold dredges left buried in the riverbed many years ago.

"We didn't see the gold dredges - they must be buried fairly deep - but we thought for a while we might be leaving a digger to join them," he said.