Down South tops in bunny hunt 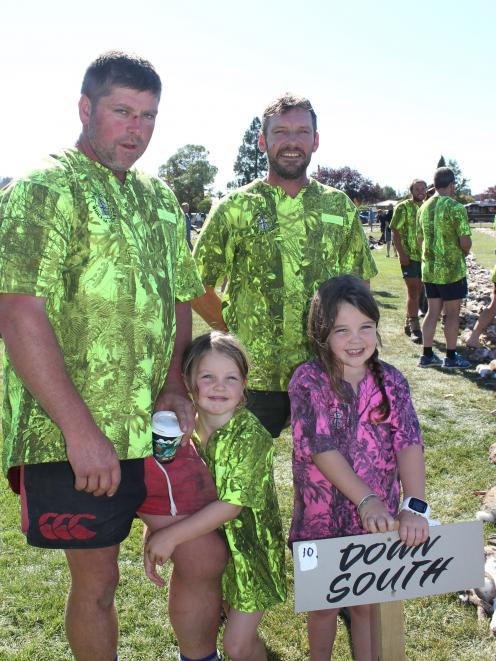 Members of winning team Down South are Brett (left) and Zoe (5) Middleton, Barry Crowe and Nikita Middleton (6), all of Winton. Photo: Jono Edwards
If one rabbit foot brings good fortune, then Alexandra is one of the luckiest towns on Earth.

The 324 shooters in the 25th Great Easter Bunny Hunt lined Pioneer Park with their kills today for counting.

The 27 teams from all over New Zealand were sent to blocks of farmland across Central Otago and near Wanaka yesterday to chip away at the local rabbit population.

Hunt convener Dave Ramsay said the event did not make a significant impact on the overall rabbit population, but it was about fun and education.

"The hunters learn that they need to keep going out shooting to keep them under control."

It was perfect hunting weather, although could have been cloudier at night for moon cover, he said.

The team Down South, made up of members from all over Otago and Southland, took out the top number of kills for its second year in a row.

Team member Chris Bell, of Dunedin, said it had been entering the competition for six years, over which they became more organised.

"The first time, we just grabbed guns and started shooting. Now we split into groups and come together and night."

The lack of sleep led to strange conversations between the group, he said. "Yeah it gets a bit weird."

The Alexandra Scout Group were tasked with picking up the carcasses after they were counted so they could be deposed of in a pit on rural property.

The event is run by the Alexandra Lions Club, which will this year donate the money to the Friends of Dunstan Hospital.

A total of 297,359 rabbits have been killed over the event's history.