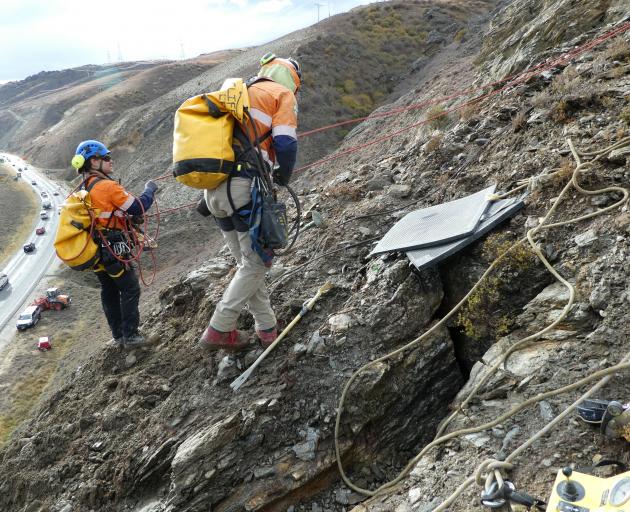 The abseilers and helicopter pilots were working on cliffs above State Highway 8 in the Cromwell Gorge on Wednesday for regular maintenance.

Central Otago senior network manager Robert Choveaux said scaling and maintenance work was done ahead of the winter freeze-thaw period and would continue until the end of June.

"This work in the Cromwell Gorge is part of our annual network scaling/rock removal programme to reduce the risk of rockfall hazards identified through geotechnical inspections at least twice a year.

"Last week there was similar scaling work under way in the Lindis Pass area ahead of the winter freeze and thaw period."

He said a helicopter was being used in the Cromwell Gorge but a drone appeared during the work.

"There was an issue with a drone [on Wednesday] operating near where the crew was rock scaling in Cromwell and using a chopper.

"We would like to remind everyone that there are major safety concerns for our chopper and abseiling teams when unauthorised drones are in the air near where they are working - particularly around chopper blades.

"Anybody wanting to send up a drone over the state highway has to request permission from Waka Kotahi NZ Transport Agency to avoid exactly this situation arising."

A police spokeswoman said she had spoken to two Cromwell officers who were not immediately aware of any report about the drone.

Police would gather as much information as possible and then pass it to the Civil Aviation Authority (CAA) for consideration, she said.

Anyone with concerns about drone activity is urged to contact either the CAA or police.