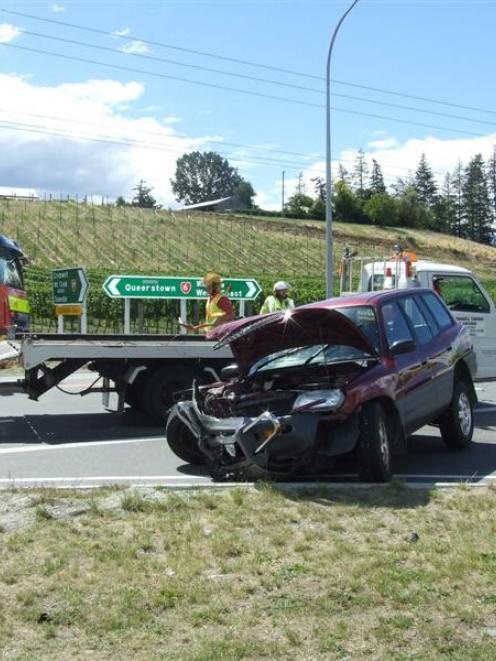 The intersection of State Highway 8B and 6 has been the site of many crashes, including fatalities. Photo by Lucy Ibbotson.
The grape vines have been removed, the land has been bought and the contractor is ready to go.

The only thing standing in the way of the redesign of a notorious Cromwell intersection is a formality of the Central Otago District Council.

The intersection of State Highway 8B and 6, known locally as Vets Corner, has been the site of many crashes and fatalities.

As well as reducing the speed limit from 100kmh to 80kmh for 300m either side of the intersection, the New Zealand Transport Agency (NZTA) is preparing to separate the left turning lane used by motorists turning into State Highway 8B from the main flow of traffic.

To create the new left turning lane, NZTA has purchased about 2240sq m of former vineyard land from Wooing Tree Holdings Ltd, for $65,000.

NZTA has applied to the Central Otago District Council, asking it to change the designation of the land in its district plan for State Highway purposes.

NZTA Central Otago area manager John Jarvis said while this was just a formality, it was the last piece in the puzzle before work could begin.

He said the contractor was ready to go as soon as the agency heard back from the council following a meeting of its hearings panel today.

The work will include an extension of the road drainage, relocation of lights, a minimal amount of earthworks, sealing and marking.

Once finished, it will increase visibility of oncoming traffic to the north (from Wanaka) for traffic on State Highway 8B.

According to NZTA's application, the most common crash at the intersection involved turning traffic and they were mainly attributed to drivers waiting to turn right having difficulty distinguishing left turning traffic from through traffic.

NZTA had considered other designs but considered this to be the best option, because it offered the greatest visibility.