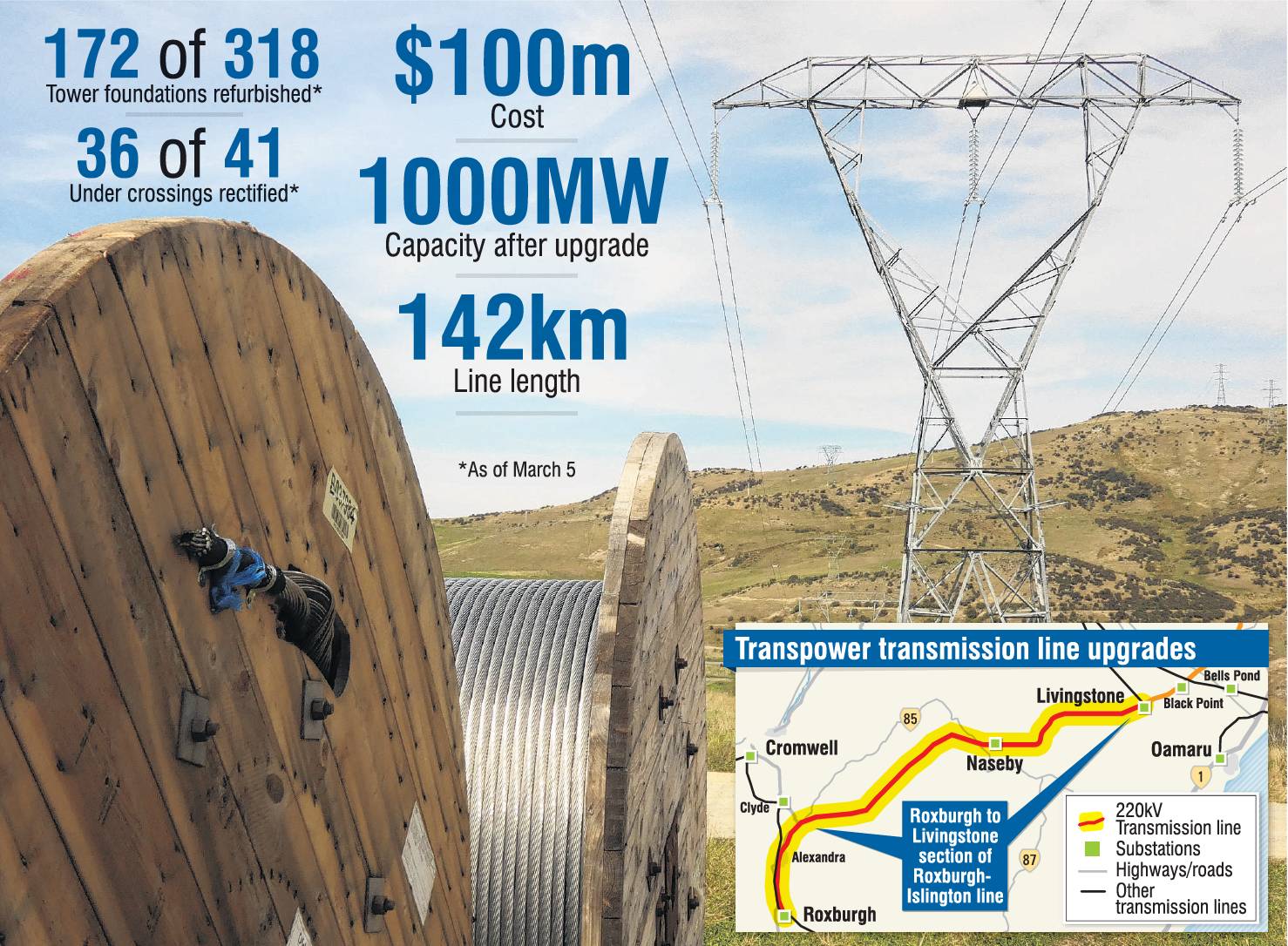 Graphic: ODT
A $100 million investment but little for the casual observer to see. That is testament to the professionals rewiring the national grid from Roxburgh in Central Otago to Livingstone in the Waitaki district.

It is happening overhead, by stealth, yet it is the most significant electricity infrastructure upgrade in the area since 1956 and the Roxburgh Dam.

It Is an exercise in scale.

A cognitive dissonance occurs when you look at the components involved in upgrading the Roxburgh-Islington lines of the national grid.

From overhead on the pylons, known in the industry as "towers", which continue northwestward across the arid Central Otago landscape from the Roxburgh Dam, those components look small.

Up close at ground level the same components look quite different. From the spacers to separate lines, bigger than an adult male’s forearm, to the lines cables about the thickness of the handle of a cricket bat, the scope and scale of the Clutha Upper Waitaki Line Project (CUWLP) is hard to comprehend.

Transpower CUWLP project director Roy Noble is on hand to decipher it all.

Armed with an encyclopaedic knowledge of the project, he reels off the details of the upgrade with ease. 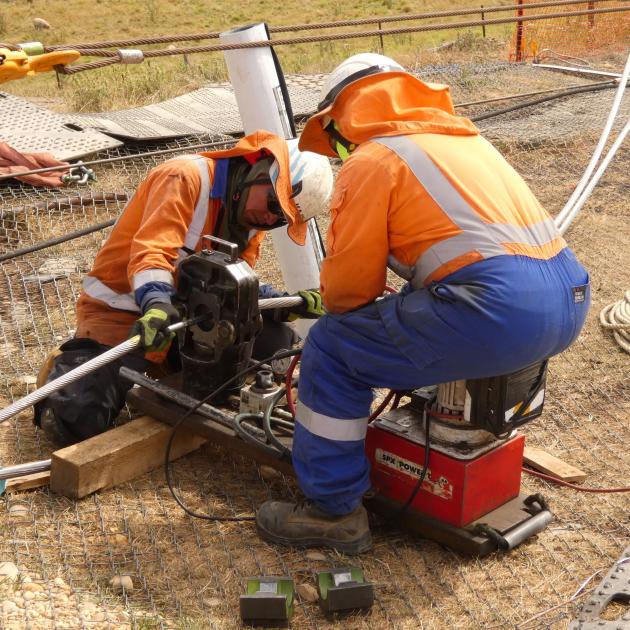 As Mr Noble tells it, the fact the "hurdles" — five in total that straddle State Highway 8 towards Roxburgh from Alexandra and remain in place for about two weeks at a time before work transfers to the next set of lines — were the most visible and disruptive part of the work was evidence of a job well done.

The hurdles are in place to avoid disrupting traffic and to catch a line if it falls during the tensioning process — something he had seen happen only twice in his 38-year career, Mr Noble said.

While the lines were not live during the process, their sheer scale and weight posed a significant risk and safety was one of the cornerstones of the work under way, he said.

The CUWLP will increase capacity on Transpower lines between Clutha and the Upper Waitaki Valley to improve electricity supply to Southland during dry periods, and to allow additional generation — should it become available — to be exported from Southland.

That means the electricity generated at the Manapouri Power Station in Fiordland now used by Rio Tinto’s Tiwai Point aluminium smelter will be able to be fed into the national grid after the smelter closes, which is tipped for December 2024. 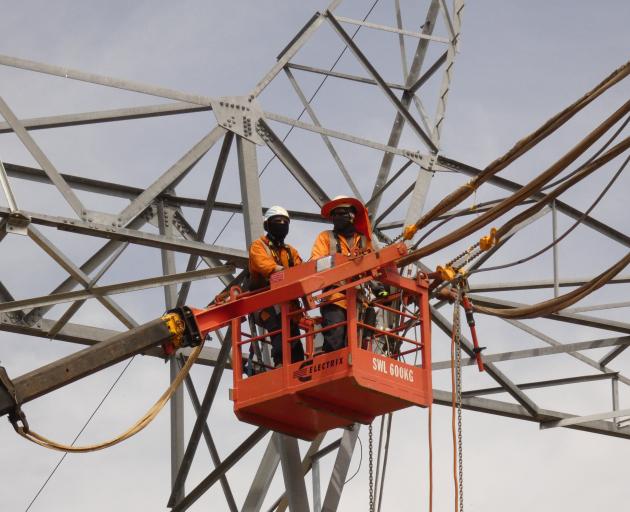 Workers at the top of a tower on the Transpower Roxburgh-Islington line near Roxburgh.

When Rio Tinto announced Tiwai would close in August before backtracking on that decision, the date for the CUWLP was brought forward to May 2022 from winter 2023.

Manapouri generates 13% of New Zealand’s electricity and enabling that to be carried elsewhere is an indirect reason behind the upgrade.

Other reasons include future-proofing the grid by, for example, carrying power from the proposed Lake Onslow pumped hydro storage scheme, should it go ahead, and enabling the development of renewable energy generation.

Mr Noble said that work was well on track and the upgrade from Roxburgh to west of Alexandra (23km) was completed earlier this week, some seven weeks after it started.

The Roxburgh Dam was a hub in the national grid between north and south, Mr Noble said.

"If Tiwai goes, Manapouri’s energy will flow through here. If Onslow happens, it will help. If renewable generation is built, it will help."

The current project is part of a project that involves five components with a total approved cost of $197million.

The first two components (which keep Southland secure during dry periods) were delivered in 2015 and 2016 at a cost of about $38million.

The work in Central Otago involves 70 workers from Electrix working on replacing the lines, and around 20 more workers from national maintenance and project services companies Electronet and Ventia working on strengthening foundations and pylons. The majority of these workers are based in Alexandra.

"It’s a win-win for Central Otago. Those guys come in and they spend money here. They’re here for a long period of time — it’s a significant boost [to the economy]." 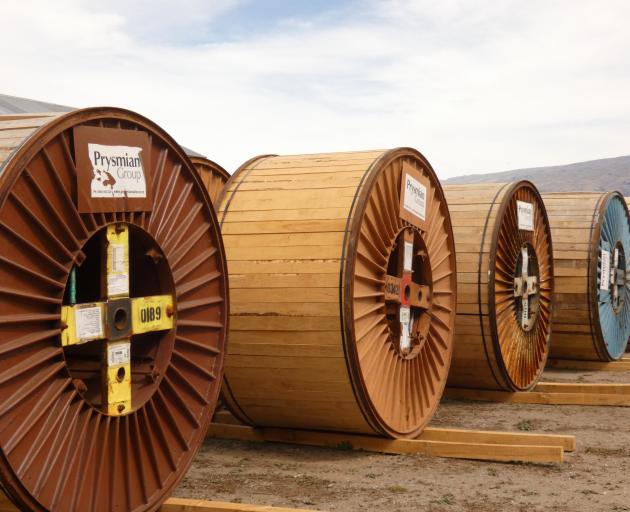 Reels each holding 3.2km of aluminium and galvanised steel conductor cable stored at a yard near Clyde.
Those workers, who were mostly from the Palmerston North and Hamilton areas, were on a rotational roster, meaning they returned home to family regularly and that was part of Transpower’s undertaking to ensure its workforce was well looked after.

The work also took into account the needs of landowners, Mr Noble said.

Now work was complete on the Roxburgh to Earnscleugh section, it had moved to Galloway and the Ida Valley to account for seasonal demands on farmers — particularly concerning lambing.

Landowners were generally very accommodating and it was a case of looking out for their needs as much as the needs of Transpower in terms of working with them to ensure the project went ahead with minimal disruption, Mr Noble said.

The project would continue to roll out to the end of May and then restart with the section through Alexandra in October.

The section between Naseby and Livingstone (over Danseys Pass) would be completed between January and April next year.

Another "win-win" for the local economy was the initial proposal to build a workers’ village in the Ranfurly area — something that had already been approved by the Government under the fast-track consenting process.

Mr Noble clarified that Transpower had since decided against that option, instead supporting various accommodation options already available in the area.

"That’s a win-win for the local community, who have been extremely welcoming in offering local accommodation options."

Even with the decision made by Rio Tinto, Transpower was continuing to target completion of the entire project by May next year.