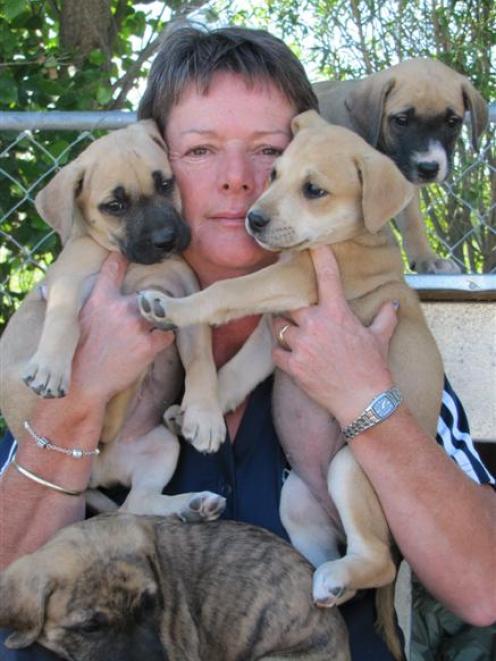 Alexandra SPCA inspector Helen Saunders with some of the puppies that might not have been left in a bin. Photo by Sarah Marquet.
The story of nine puppies left to die in a rubbish bin by Lake Dunstan in Clyde which gained extensive media coverage last month, may have been just that - a story, and a tall one at that.

Alexandra SPCA inspector Helen Saunders, who ended up with the litter, now believes the puppies were never actually left in the bin.

Instead, she suspects it was a ruse by an owner who wanted to be rid of them.

Mrs Saunders said her investigations had led her to believe the woman who had taken the puppies to the vet, telling them she had found them in the bin, had instead made up the story, possibly because she thought it would make the vet or the SPCA more likely to take them off her hands.

She said the woman had left her name and phone number at Central Vets Ltd when she dropped off the litter, believed to be Staffordshire bull terrier or mastiff-cross pups.

After media coverage Mrs Saunders received a number of calls that led her to an address in Omakau.

When she went to that address, no-one was there.

However, "there was a bitch there that was lactating but there were no puppies" and she was sure the puppies belonged to her.

"My instinct would say that what she did was take them into the vet and made up the story.

"So I assume the puppies were never in the bin."

She said the SPCA, unlike the police, cannot charge someone for wasting their time.

"So we can't make her accountable; we can't charge her with anything."

Because no charges would be laid, she could not release the woman's name.

However, she said the woman and her partner had since "packed up and moved".

"The whole process has been a huge, huge waste of our resources ... On the good side, the publicity means that we have so far got homes for six puppies ... four have already gone and two will go up to Auckland next month."

The remaining three puppies are living at a foster home in Alexandra until permanent homes can be found.