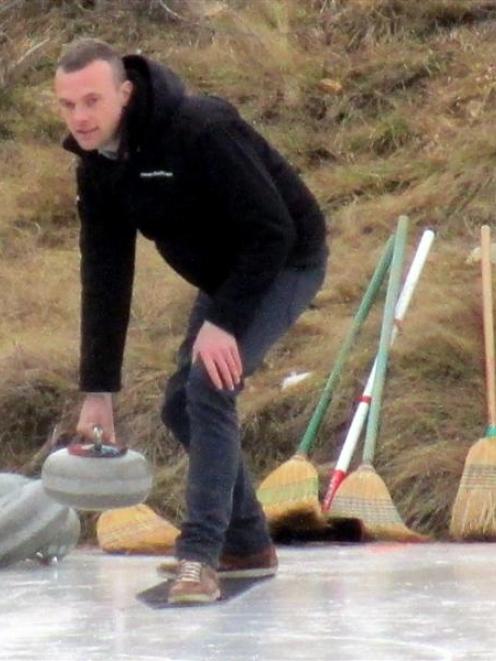 However, after staking out the Centennial Ponds at Naseby for two days and watching everyone curl for hours, I decided I wanted to try it.

But not without encouragement from my helpful teacher, Naseby Curling Club member Stacey Herd.

At first, I was apprehensive but she said she would hold my hand and guide me.

Plus it was lunchtime for the curlers and everyone was distracted - the fewer laughs the better.

She first taught me how to stand, swing and curl all together, but warned me not to drop the 19kg stone.

I had a vision of ruining the first national bonspiel in Naseby for 80 years by breaking the ice open.

She added another warning: if I delivered the stone and it toppled over on the ice, I would have to shout the entire team a bottle of whisky.

Brushing fears aside, I had a go, ''delivering'' my stone a staggering 5m. She gave me another stone and asked me to point my foot in the direction of the broom.

Left hand on knee, right hand swinging, I delivered another one further down the rink, eventually getting a nod from the skip.

The fifth stone was the most successful, shooting down the rink with good speed, almost making it to the ''house''.

Afterwards, Ms Herd said I had to abide by curling traditions and have a curler's cocktail of apple cider and ginger wine, and suggested I was good enough to join the local club.

We will have to see about that.