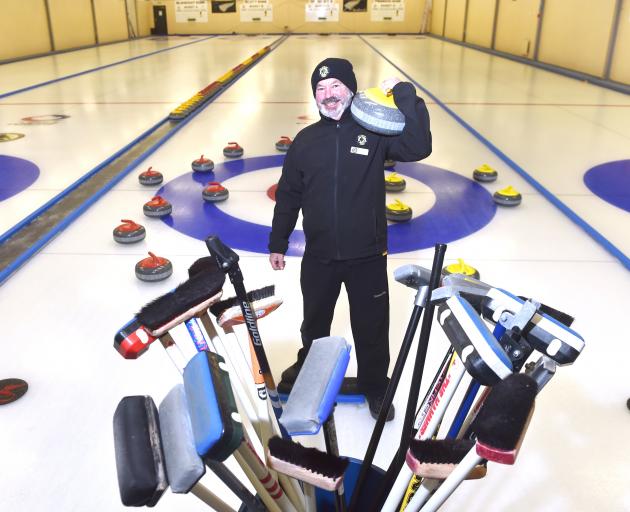 Manager Ewan Kirk and his team are ready for a busy couple of weeks at the Maniototo Curling International rink. PHOTO: PETER MCINTOSH
In Naseby, it is cold inside too.

At the town’s big drawcard, the indoor curling rink, that is as it should be and everything is ready for the visitors to hit town.

The Maniototo Curling International rink on Channel Rd officially opened yesterday after a delayed start to its season due to Covid-19 lockdowns and uncertainty over whether or not to keep the rink iced amid doubt about when it would be able to reopen.

Rink manager Ewan Kirk said, despite the uncertainty, the rink was prepped and ready as it looked likely to make up for lost time and revenue well through until next year.

"Bookings are really positive — typically, we’d expect that for the school holidays, but it has been consistent with social groups and corporate functions also making bookings on the ice."

That was positive because the rink had missed March and April which was usually the busiest time on the back of rail trail traffic, he said.

Bookings for that time next year and right through the summer were shaping up to be a "double hit", he said.

"The domestic market has been ringing on the doorbell."

The rink made the decision to close on March 25 as the country poised to go into full Level 4 lockdown.

The next decision regarded the ice itself and whether to leave it in or remove it.

Both of these options carried costs, Mr Kirk said.

Taking it out would mean resurfacing and repainting, while keeping the rink frozen incurred running costs.

"We decided to leave it in."

That involved an "ice chip" which took the top layer off the ice, but did not extend as far as the paint level, he said.

That meant making the decision not to reopen under Level 2 just to close again to complete the ice chip.

The chip was typically done "every other year" in June, normally before tournaments, he said.

"It is like rotary hoeing the soil in your garden and then using a hose to put layer after layer of clean ice back."

A large team of volunteers had been working alongside the ice team over the past week before yesterday’s "magic date", he said.

The artificial outdoor rink was also open, but the natural skating and curling ponds across the road remained a "bit watery".