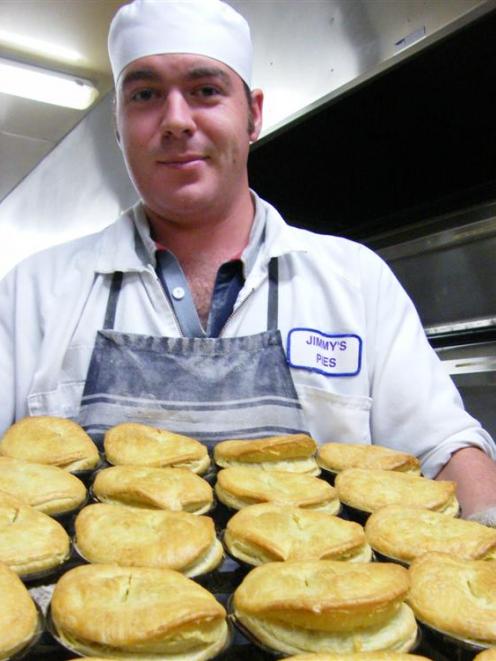 Pastry chef Bernard Kirkpatrick, of Roxburgh, takes another tray of pies out of the oven at Jimmy’s Pies. Photo by Lee Jamieson.
‘‘Rocketing'' pie sales are an indication that families are struggling financially, Roxburgh piemaker Dennis Kirkpatrick says.

Rising prices for staples such as flour and margarine have pushed up the price of his pies but, despite that, sales are booming.

‘‘I always reckon our business [Jimmy's Pies Ltd] is like an indicator of the economy,'' Mr Kirkpatrick said this week.

‘‘If our business is booming, the economy's not so great. Pies are a cheaper option for people than dining out, so they'll buy pies to go with their spuds and peas instead of going out for a meal.

‘‘If demand for pies is up, then things aren't so great out there. At the moment, sales are rocketing.''

Central Otago agencies dealing with families agreed with his comments. Central Otago Budgeting Service manager Pam Hughes, of Alexandra, said demand for budget advice was ‘‘constant'' and the number of people on the service's books was steadily increasing.

‘‘People are finding it harder to make ends meet and it's harder for us to juggle their budgets, too,'' Mrs Hughes said.

‘‘Often, our clients are lowincome families and they are already receiving all the government assistance they're entitled to.''

The increasing price of basics such as bread and milk, combined with rising petrol and power prices was adding extra pressure.

Captain Wendy Sanson, of the Salvation Army in Alexandra, said there was more demand for foodbank supplies.

‘‘High food prices have had a huge impact on families who are really stretched financially,'' Capt Sanson said.

Cheese, bread and milk were being viewed as luxury items.

Mr Kirkpatrick said the cost of New Zealand flour and margarine used in his pies had gone up by 50 per cent this year, while the cost of butter, used in cakes and biscuits, had doubled. The cost of fuel had also played a role in boosting his expenses.

He has increased the price of his pies twice this year and they now sell for $3.

Every weekday, he makes 20,000 pies, which are mostly sold in Otago and Southland.