Story of a piano, in three movements 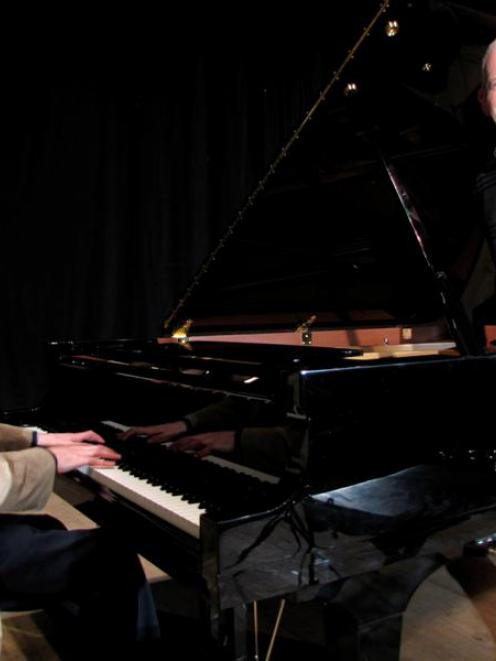 Cromwell Community Arts secretary Peter Mead (right) is pleased the town has finally got its grand piano, after treble mishaps. Hungarian pianist Peter Nagy (left) first played the new piano publicly at a concert in Cromwell last night. Photo by Sarah Marquet.
They say things come in threes. The Cromwell Community Arts group is all too familiar with the experience after the delivery of its long-awaited grand piano suffered three mishaps.

Group secretary Peter Mead said the $65,000 piano was originally bound for Bannockburn Hall, but that was closed in March because it was deemed to be at risk of structural failure if an earthquake occurred.

The group found a new home for the piano in the Cromwell Memorial Hall, but on February 10, because of a freighting mix-up, it was delivered to a Queenstown residential address instead of the hall.

Then, for logistical reasons, the freighting company took the piano back to its Christchurch depot. It was still there when the February 22 quake struck.

Mr Mead said: "It fell over, liquefaction came up and flowed through its innards ... it was unplayable.

"But it was all covered by insurance, so it was sorted quickly and a replacement was ordered." The mid-sized (2.15m long) Boston grand was made by Steinway, of Germany.

Mr Nagy said he was "pleasantly surprised" at the quality of the piano.

"I am a Steinway artist so I know the brand very well. It was a very good choice and I am pleased to see it has good storage, too."

Mr Mead said the arts group was given an additional $3000 to build the storage facility. It would keep the temperature and humidity low to protect the piano.

The group chose the piano, but was guided in its choice by Timaru piano tuner Stuart Croft.