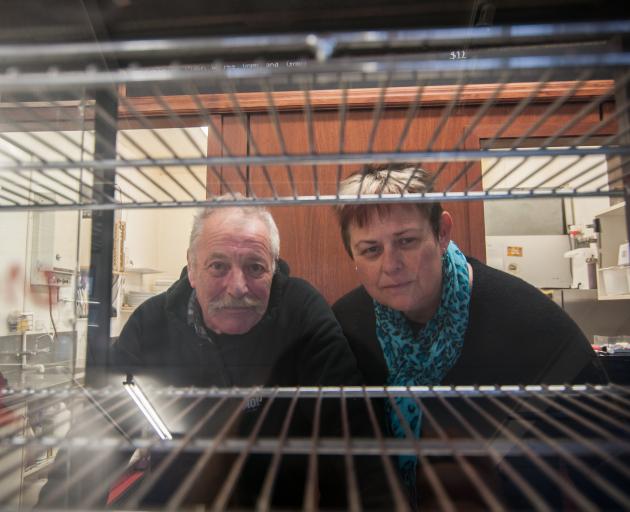 Cafe Rossi owners Mark and Donna Coleman in their empty cafe after closing its doors for the final time. PHOTO: SHANNON THOMSON
A one-two punch in the form of a large-scale theft by a former manager, followed by the impact of Covid-19, have forced a central Alexandra cafe to close its doors permanently.

Cafe Rossi, in Tarbert St, closed for the final time on Saturday, leaving owners Mark and Donna Coleman bereft as the decision was largely out of their hands.

"The accountant advised us not to keep trading," Mr Coleman said.

The closure fell in the same month the Roxburgh-based couple took over the business three years ago and it had not been smooth sailing, due to circumstances beyond their control.

"In our first year we had a mishap," Mr Coleman said.

That mishap, was the theft of about $25,000 over three months by the cafe’s manager, whom they inherited from the previous owners.

They were recouping that money at a painfully slow rate, she said.

"If Covid hadn’t hit we would have been right," Mr Coleman said.

Mrs Coleman said the wage subsidy had helped them through the worst of Covid-induced restrictions but it took a long time for people to come back.

The cafe had built a loyal customer base, something she put down to good New Zealand food.

"It was all Kiwi tucker, not a la carte.

"We had people come from Queenstown once a fortnight for breakfast — they said you couldn’t get a breakfast like that anywhere else."

Cafe regulars included a friendship club, police every Monday morning for their special coffees, the Alzheimer’s Club and recognised seasonal employer scheme workers who "used to clean out our [food] cabinets".

The cafe had been for sale because of her health, Mrs Coleman said.

They were left with the cafe’s chattels.

"We didn’t really want that — we’ve got to have somewhere to store them and someone to buy them," Mr Coleman said.

Mrs Coleman said the decision to pull the pin was not an easy one.

Mr Coleman agreed, but it was "do it now or dig ourselves a bigger hole".

The couple thanked their customers and their three staff.