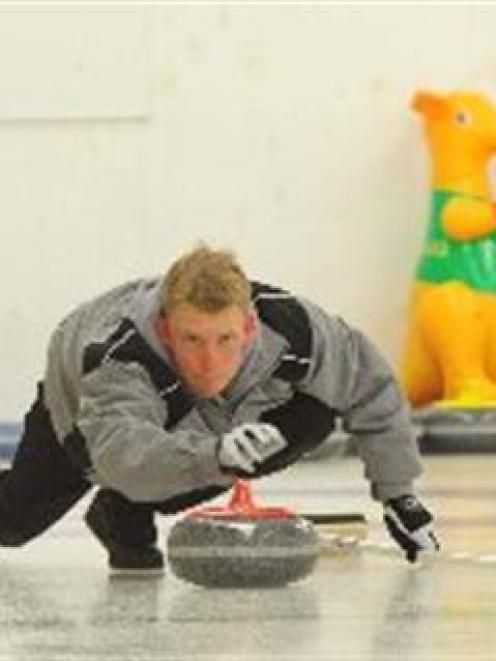 Colby Oracheski plays for the Dave Thomas team at the Maniototo Curling Rink in Naseby yesterday. Photo by Craig Baxter.
Chants of "Aussie Aussie Aussie, Oi Oi Oi!" might be heard in Naseby this weekend as two teams of curlers from Queensland compete against some of New Zealand's best for a transtasman title.

The three-day tournament at the Maniototo International Curling Rink comprises seven rounds of curling, a semi-final, and a final game scheduled for tomorrow afternoon.

Three junior teams, including one from Queensland, are also competing against one another.

Maniototo Curling International manager Fred Newman said some Australian teams had to pull out of the competition as they would be competing in their national championships at Naseby next month and could not afford to make both trips.

The skip of the New Zealand men's national curling team, Sean Becker, is competing, as is his father and members of most of the country's other national teams.

Mr Becker said although five New Zealand and two Australian teams were entered in the tournament, only games between the two countries counted towards the trophy.

He said the rink's ice was particularly fast, which was partly helped by the new de-humidifying unit, worth nearly $75,000, that was installed in the complex last month.

"Good ice is all about being consistent so the stone does the same thing over the whole rink."

In order to combat rule variation, clashes between the teams during the tournament are being held in accordance with the World Curling Federation rules.