Tourism industry has responsibilities in earthquake 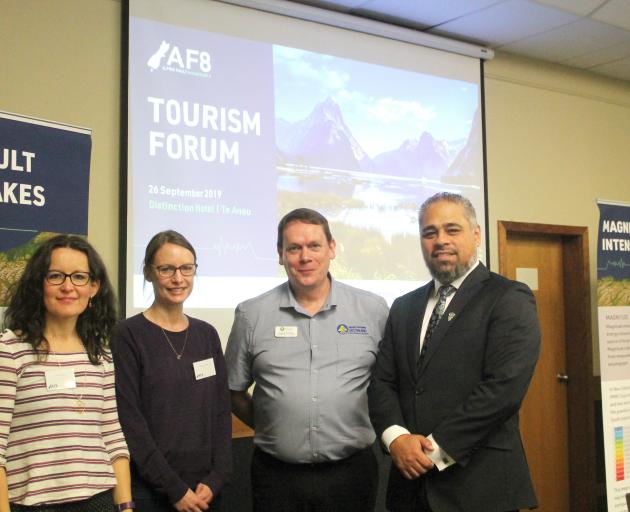 The AF8 project team of (from left) Caroline Orchiston, Alice Lake-Hammond and Angus McKay, pictured with Minister of Civil Defence Peeni Henare, during the AF8 Tourism Forum in Te Anau yesterday. PHOTO: LUISA GIRAO
In the event of an Alpine Fault earthquake, the tourism sector needs to step up and advocate for visitors to the region.

About 100 members from across the tourism sector, scientists and emergency management groups gathered at the AF8 Tourism Forum yesterday in Te Anau to discuss how they could be better prepared for a large scale natural event.

Project science lead Caroline Orchiston said the sector could expect a lot of international media attention in the case of an AF8 (Alpine Fault, magnitude 8) earthquake.

"How we look after our visitors will be scrutinised.

"Tourism is crucial to our economy. We had recent experiences in Christchurch and Kaikoura, when our international tourists were caught up in the middle of all that.

"It is really important to respond quickly and effectively to not damage the image of the country."

AF8 chairman and Emergency Management Southland manager Angus McKay said civil defence would not be able to help everybody in the first instance.

Tourist providers, he said, also had a responsibility to look after customers and staff.

Southern Discoveries chief executive Tim Hunter, who was responsible for tourism in Canterbury at the time of the 2011 earthquakes, said the region lost 5.7million visitors in the four years following the quake.

"If you considered each of these visitors spent $180 a night, that would be the economy lost in terms of spending in the city. It crushed the industry."

The key advice for the industry was to plan carefully and strengthen the relationships with civil defence and other businesses from the area, he said.

Mr Hunter also recommended to his fellow colleagues to look very closely at staff training, an effective evacuation plan and stressed the importance of having a cash reserve plan.

"Make sure you have the financial resources to get through a significant downturn in tourism flows after the event."

Following 2011 he was regularly told the visitor sector was not the priority - so "tourist operators would need to advocate for them".

Prof David Simmons, of Lincoln University, agreed and said tourists were quite vulnerable in these situations.

They might not understand the language or be unfamiliar with local hazard profiles.

"It puts pressure on the host community to manage these population groups."

Minister of Civil Defence and Associate Minister of Tourism Peeni Henare said as tourism was a major industry - an AF8 earthquake would have a "significant overall impact on the economy" of the whole country.

"We can only prepare as much as we can. We ... are dependent on the preparedness of the community, its people and its businesses."