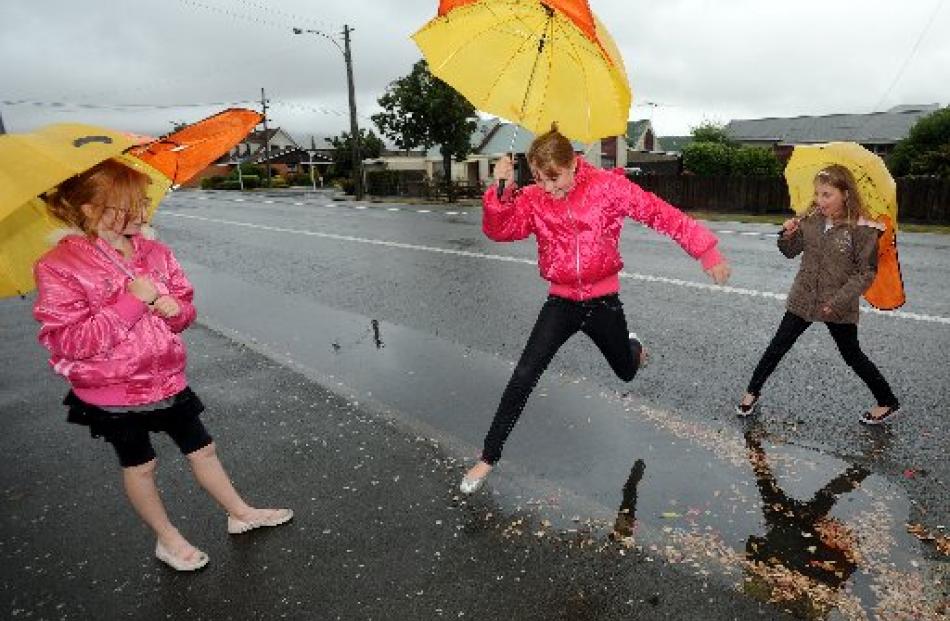 Not deterred by the rain in Mosgiel yesterday are (from left) Erina Palmer (10) Caitlin Ealson (11) and Emily Ealson (8) on their way to the swimming pool. Photo by Craig Baxter.

Widespread rain across Otago yesterday brought relief to those relying on plant and grass growth, but also caused rivers to rise quickly, and some surface flooding.

Up to 60mm had fallen in parts of Otago, with some "intense" falls of 10mm-13mm an hour in places, but about 3mm an hour was the norm and welcome, Otago Regional Council environmental Services manager Martin King said.

Where high intensity rainfall had hit on parched ground, for example which had lacked significant rainfall for about six weeks, it was running off into rivers, rather than soaking in.

The Pomahaka and Kakanui Rivers were well above their second flood alert level last night.

River levels were expected to drop today, although further lighter rainfall was expected throughout the weekend before a high arrived early next week, bringing settled weather.

Campers and farmers should keep a close eye on rising rivers, the council advised.

The water level of Lake Wakatipu was recorded as 309.625m at 3pm yesterday, comfortably below the first alert level of 310.8m.

Waitaki District Council emergency services manager Chris Raine said the severity of the rain peaked at 13.9mm per hour (7mm an hour was considered heavy), with 23mm falling between 9am and 10.30am. It caused some surface flooding in Oamaru.

But for Outram market gardener Steve McArthur, who grows vegetables such as cabbages and broccoli as well as berries, it was a "good, gentle" rain, which could not have come at a better time.

His cabbage, cauliflower and broccoli crops had perked up with the rain, and the winter crops he had planted in "dust" last week were also looking better.

"This will sink in nicely."

Ground that had been as hard as concrete yesterday was now soft enough to poke a hole in.

Federated Farmers Otago president Mike Lord said while it had been dry, farmers were not desperate, but the rain had come at the best time to get winter crops started and help pasture along.

It was still to be seen whether the amount of rain would be enough to get them out of trouble, and a lot depended on whether more rain came in coming weeks, he said.

"It's been quite good and timely."

Central Otago District Council water services manager Russell Bond said although the rain was a "short reprieve", the council would not be changing the orange status of water use for Cromwell, Bannockburn, Lowburn, Pisa, Alexandra, Clyde, Omakau and Ophir.

Orange status requires residents in those areas to reduce water use.

In Southland, rain between 20mm and 40mm fell overnight on Thursday and yesterday.