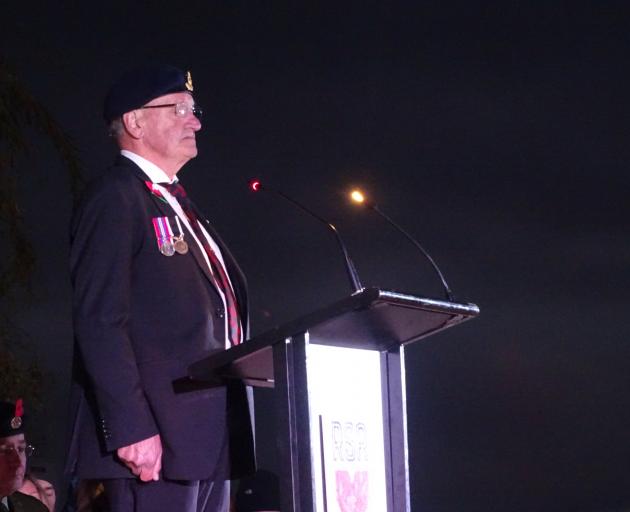 Queenstown RSA president Lyall McGregor at this morning's dawn service. Photo: Tracey Roxburgh
A huge crowd gathered around the Memorial Gates at the waterfront this morning for the dawn service, where a larger police presence was evident.

"This day marks the anniversary of the landing at Gallipoli. A day when the Anzac legend became an important part of the identity of both our countries.'' 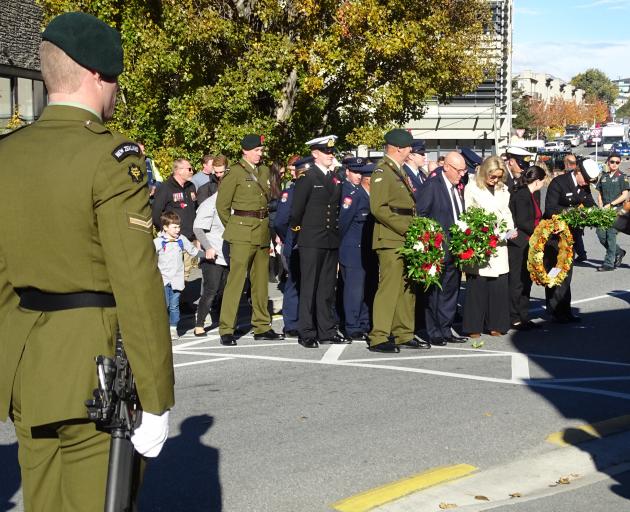 Ms Biddle said the importance of Anzac Day had not been diluted over time.

"It is a long-standing tradition that on Anzac Day we all pause to remember those who offered their lives in defence of their nation and community.

"We only have to recall those that have died or been injured in recent years on operation defence of our national interests to recognise that this tradition of silent reverence is as relevant today as it was at the first Anzac Day ceremony.''

She said it was important to remember those whose service had ended in sacrifice to enable others to live in peace; those who continued to bear the burden of their service through physical and mental scars; and those who had been left behind ''whose grief and sense of loss will never be eased''.

Soldiers in position beside the war memorial outside the Queenstown Memorial Centre following the official Anzac Day service in the resort. Photo: Tracey Roxburgh

In Oamaru, about 1000 people gathered at the World War One memorial in lower Thames St for the town's dawn service amid tight security.

Several armed police guarded the area and heavy trucks blocked access to the street at the Itchen St and Steward St intersections. 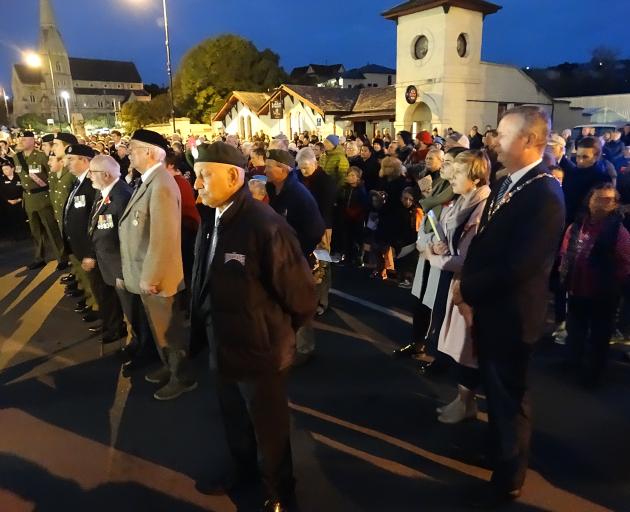 They said freedom was once again being threatened as a result of the mosque terror attacks in Christchurch and more recently, the bombings in Sri Lanka.

A mild morning on the lakefront at Wanaka saw between 600 and 700 attending the Anzac dawn service.

The music was provided by members of the New Zealand Veterans Brass Band made up of retired regular and territorial New Zealand Defence Force musicians from throughout New Zealand and Australia.

Both the New Zealand and Australian national anthems were played. 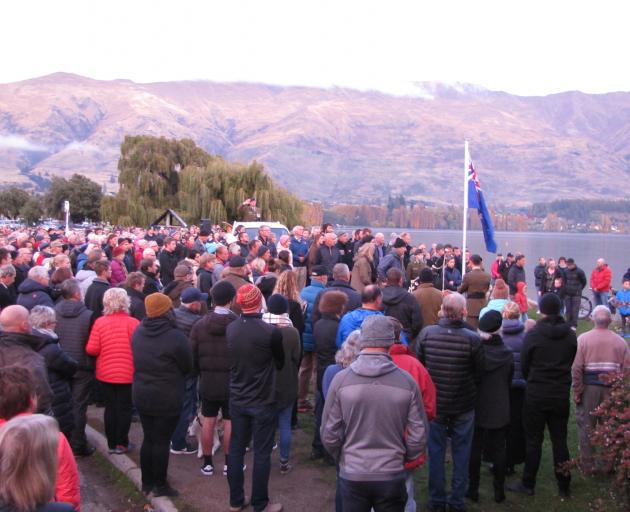 Between 600 and 700 attended the Anzac dawn service in Wanaka. Photo: Mark Price

The temperature did not deter the crowds, however, as several hundred of all ages gathered to march from the Balclutha War Memorial Hall to the town's cenotaph, led by a Balclutha Pipe Band wreathed in clouds of breath and silhouetted by a golden sunrise. 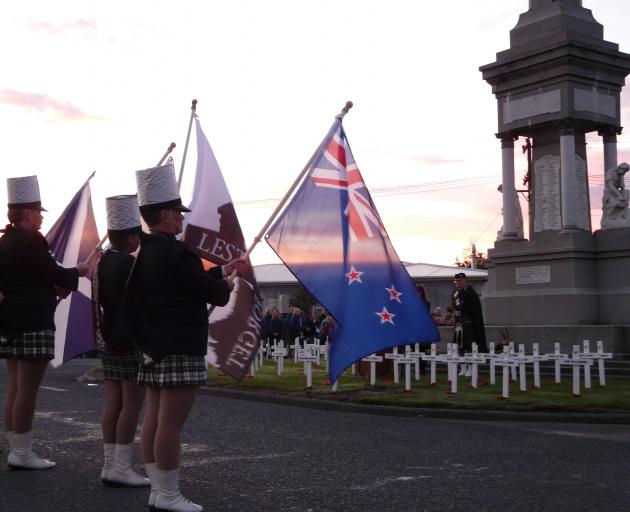 The Reverend Alex McLaughlin led a traditional 45-minute service, in which he talked of the effects of war on servicemen and women, and the "great benefits" owed them by today's New Zealanders.

"They left as boys on adventure, and returned as shell-shocked and scarred men. Were it not for their sacrifices, we would probably live today in a world ruled by fear," he said.

South Otago High School deputy head girl Amy Selwood (16) said she could not imagine what it would be like if she were forced to go to war at her present age, like so many in past conflicts.

"War is a disease that plagues our world, from the conflicts of the past to the war against terror today. This year more than ever, we must band together, and fight as one for peace in New Zealand."

As dawn finally pierced the night, Balclutha Brass Band bugler Warrick Thompson played a poignant Last Post and Reveille, before poppies were laid by the crowd at the foot of the cenotaph.

In Invercargill more than 1000 people turned up for the Anzac Dawn Parade at the Cenotaph.

At roads leading the Cenotaph there were at least two armed police officers, some with semiautomatic rifles, others with handguns. 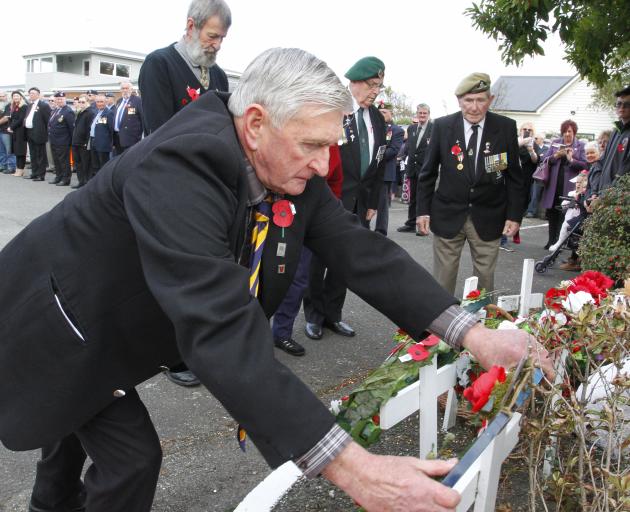 Watched by other veterans Private Pat Blair, who served in Malaya and Vietnam, lays a wreath at an Anzac Day service held at the Awarua RSA in Invercargill. PHOTO: GIORDANO STOLLEY 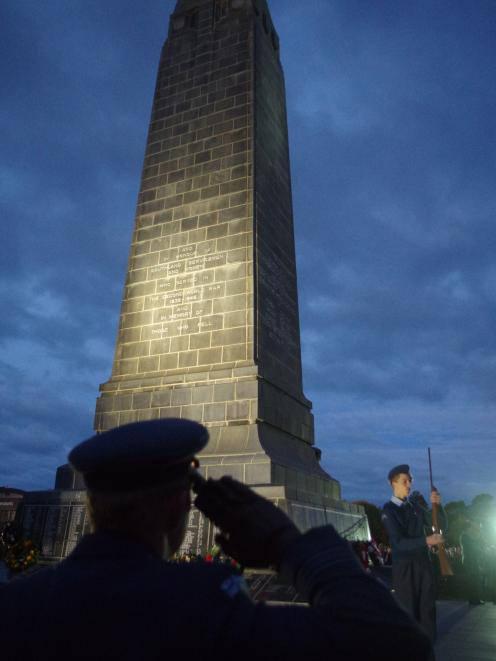 Squadron Leader Jordan Culliford salutes as Air Force cadet Jacob Palfrey (right) presents arms at the Cenotaph in Invercargill during the Anzac Day dawn parade. PHOTO: Giordano Stolley
Before proceedings commenced an announcement was made that no apology would be made for the lack of programmes because at last year’s event organisers were left having to pick up 500 discarded programmes after the event.

Among those in attendance apart from the veterans were Invercargill’s mayor, Sir Tim Shadbolt, as well as Kabour Party MP Dr Liz Craig and National Party MP Sarah Dowie.

As the parade progressed the clouds slowly started clearing. A fly past by a New Zealand airforce plane had onlookers craning their necks skywards.

Corporal Kris Maclellan, who served in East Timor in 2001 with the New Zealand Army Physical Training Corps said he was "blown away " by the number of young people in attendance.

"We seem to be passing it down through the generations." 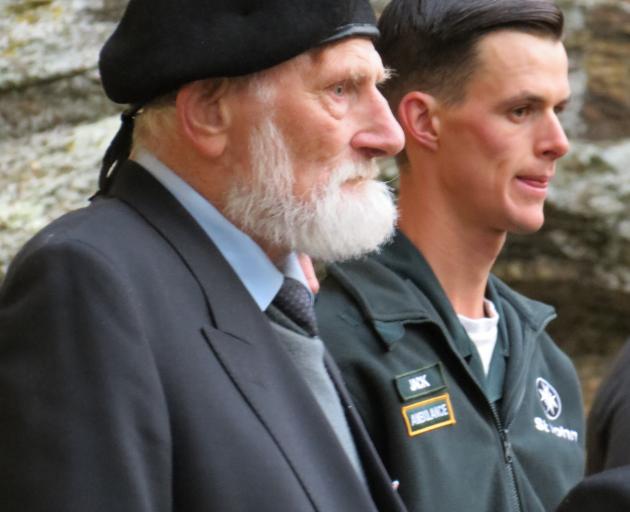 Central Otago District Mayor Tim Cadogan was the guest speaker and he talked about the lessons history teaches and the battle of ideology.

Another service was held at Millers Flat at the war memorial at 9.00am.

At least 300 people attended Cromwell's 10am service at the town's memorial hall.

Among those in attendance was Cromwell RSA president Denis Ryan who said there was a good turnout all all other services in the area, which were held earlier in the day, including one at the Cromwell Cemetery, Bannockburn Cenotaph and Lowburn. 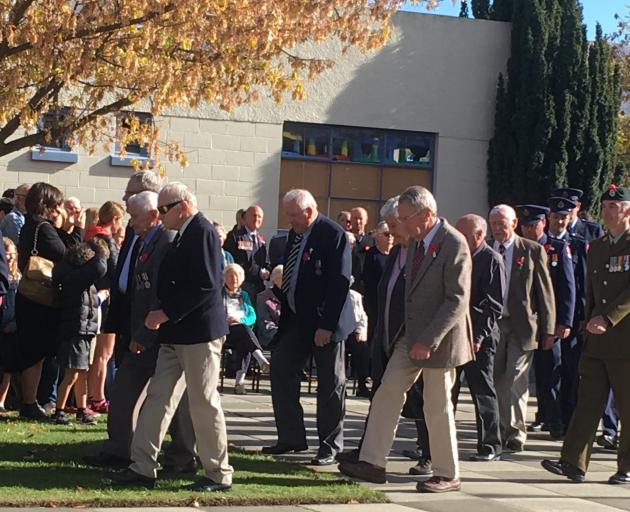 Anzac Day representatives form a procession during commemorations at the Cromwell cenotaph during the town's 10am service. PHOTO: ALEXIA JOHNSTON
1 Comment

And at services in Palmerston and Dunback, many turned out to hear commemoration author Gavin Marriott give a stunning speech from his school book 'Why Do We Wear A Red Poppy?'. It would have to be the best war memorial speech I've heard. The red Poppy started out from 2 separate women (USA & French) and is an international symbol. NZ & USA are the only country to sell this Poppy outside November and the reason for NZ is that the boat bringing these Poppies arrived too late for Armistice Day 1921, so the RSA had to sell them to get their money back. They got sold on the next commemoration date which happened to be April 25th - and that stuck. There were many myths about Gallipoli. NZ soldiers never landed at dawn and nor in the wrong place. A school essay competition to send winners to Flanders had to be cancelled due to mass inaccuracies and a survey done in shopping malls showed that few NZers could get our basic war history correct and we forget our war dead in Flanders and other battles. His speech finished with a poem he wrote at the same spot John McCrae wrote his famous poem. I suggest the ODT get hold of this poem and publish it.