He was asked if he wanted to be pushed in his wheelchair to lay his poppy in Queenstown.

Raymond Dunn's response rang out through the air:  'No, I'll walk'.

The 98-year-old delivered the most poignant moment of this morning's dawn service in the resort, walking slowly but surely to where wreaths have been laid, gently placing down his poppy, and standing in silence remembering his fallen mates from World War 2.

Mr Dunn told the Otago Daily Times he served as a Wing Commander in the Royal Australian Air Force through the Pacific between 1940 and 1945. 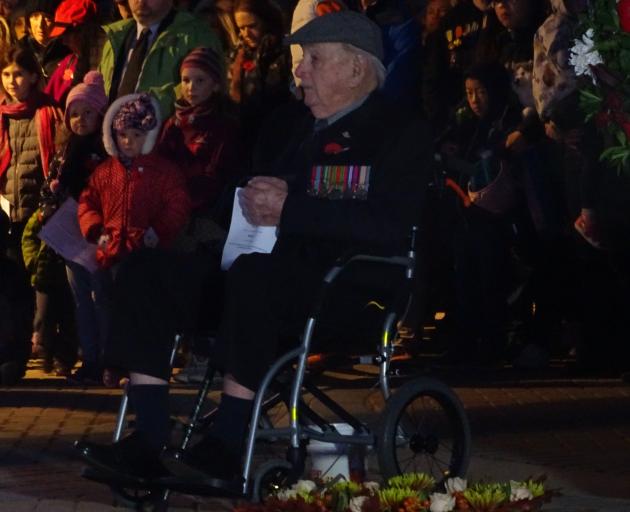 He was also loaned to the United States Fifth Airforce as a pathfinder.

The veteran said Anzac Day was ''very important'' for him.

"As a matter of fact, I was the only person from my class in the airforce to survive the end of the war.''

Mr Dunn has travelled from his home in Kaitaia to Queenstown to attend Anzac Day services for about eight years, having previously lived in the resort. 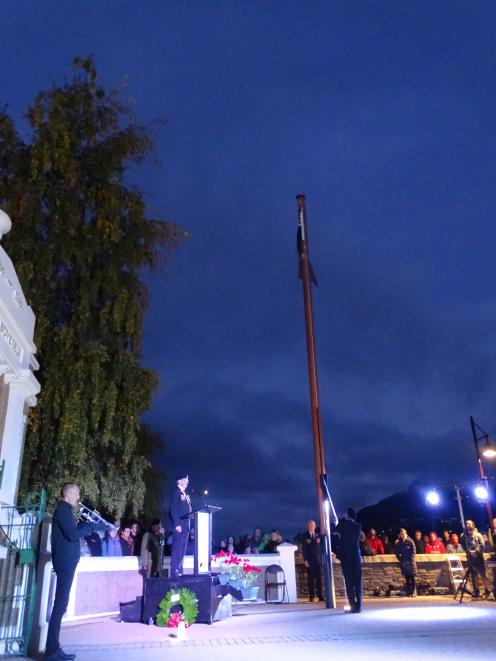 The New Zealand flag is raised during the dawn service in Queenstown this morning while bugler Gen Namaguchi plays the Reveille. Photo: Tracey Roxburgh
A huge crowd gathered around the Memorial Gates at the waterfront this morning for the dawn service, where a larger police presence was evident.

"This day marks the anniversary of the landing at Gallipoli.

"A day when the Anzac legend became an important part of the identity of both our countries.''

Ms Biddle said the importance of Anzac Day had not been diluted over time.

"It is a long-standing tradition that on Anzac Day we all pause to remember those who offered their lives in defence of their nation and community.

"We only have to recall those that have died or been injured in recent years on operation defence of our national interests to recognise that this tradition of silent reverence is as relevant today as it was at the first Anzac Day ceremony.''

She said it was important to remember those whose service had ended in sacrifice to enable others to live in peace; those who continued to bear the burden of their service through physical and mental scars; and those who had been left behind ''whose grief and sense of loss will never be eased''.