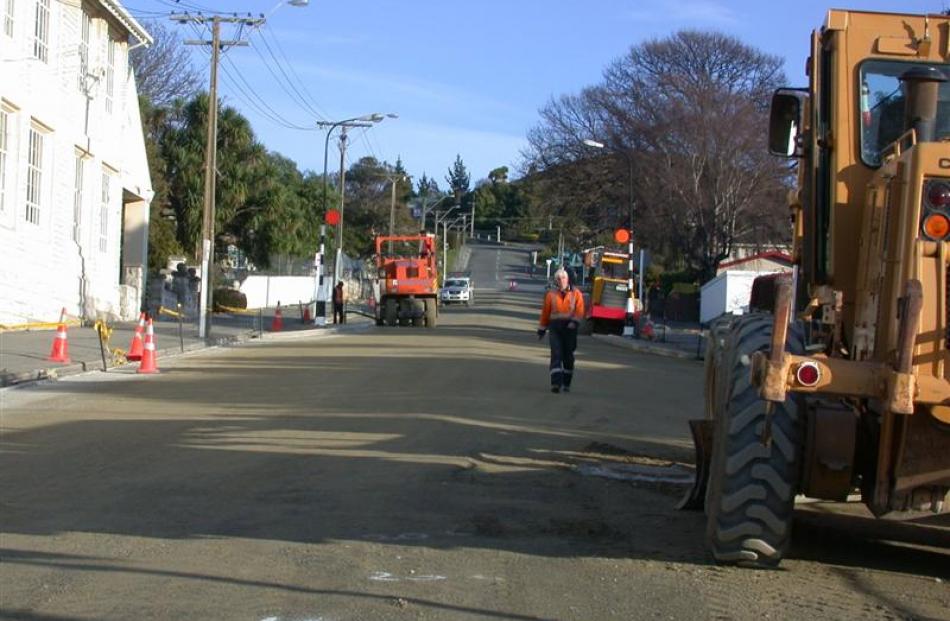 Contractors put the finishing touches to Ouse St yesterday before sealing the street and reopening it - but the Waitaki District Council still has to decide whether it will stay open or be closed. Photo by David Bruce.

Whether Ouse St should stay open or be closed is one of the most controversial issues faced by the Waitaki District Council in recent years as it prepares to consider a request to close it permanently.

Waitaki Girls' High School suggested the street, between Thames and Reed Sts which splits its campus, remain closed after the council closed it for road works which started about 16 weeks ago.

The council called for public feedback on the proposal and by yesterday's deadline was expected to have received responses from more than 700 people. That included several petitions for and against the proposal - one from more than 300 residents in the Derwent St and Reservoir Rd residential areas who use it as the main arterial route to their homes.

Council communications and policy support officer Michelle Beer said yesterday all the responses would be collated and a summary prepared for a report to the council's meeting on August 23.

That would include comments made at a public meeting on Monday attended by about 60 people. Most were residents who would be affected by the closure and were strongly opposed.

At its August 23 meeting, the council will decide whether to seek further information, keep the street open or close it.

Closing Ouse St through Waitaki Girls' is not a new issue - it was raised in 1974. In 2002, senior pupils submitted a plan to the council, but the street remained open.

The latest proposal came when the street was closed so water and sewerage pipes could be replaced. Yesterday, contractors were preparing the street for sealing so it could reopen until a final decision on its future was made.

Waitaki Girls' submitted the proposal to improve safety for its pupils, who have to cross Ouse St to get to classrooms, boarding establishments, sports fields and the Waitaki Community Recreation Centre.

However, while strongly advocating the closure, principal Lynlee Smith acknowledged the concerns of those who would be affected and said the school would live with whatever decision the council made.