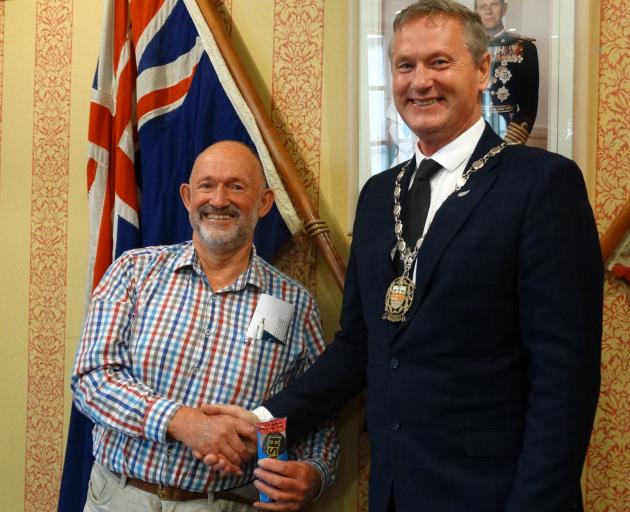 Ahuriri Community Board member Peter Ellis (left) is sworn on to the board by Waitaki Mayor Gary Kircher last year. Mr Ellis has taken extended leave until November 3. PHOTO: ODT FILES
A Waitaki community board member has been granted extended leave to avoid triggering a third by-election this term.

He cited personal circumstances for quitting. He will be on leave, without pay, until November 3.

Mr Power was living in Richmond, near Nelson and while he owned a property in Kurow, he was unclear when he would return.

The community board has already had two by-elections this triennium.

The first, when Mr Ellis was elected at the end of 2019, was triggered to fill a position not filled at the local body elections in October that year.

Steve Dalley was elected in her place.

Mr Ellis regretted spending only a short period on the board.

"[I] haven’t felt like I’ve been of much use to them, but it’s the way things have gone," Mr Ellis said.

As a Kurow resident for eight years, he came to appreciate the voice of community boards.

"I don’t think it’s fully understood by a lot of constituents who sort of don’t appreciate we’re there to represent them ... so that the council have a better spread over the district."

Mr Kircher said Mr Ellis’ leave was a pragmatic approach to avoid a by-election and allow "good democracy" to continue.

There would be no stand-in board member as Mr Ellis was still technically "on the books".