Burglars’ loot could be worth thousands 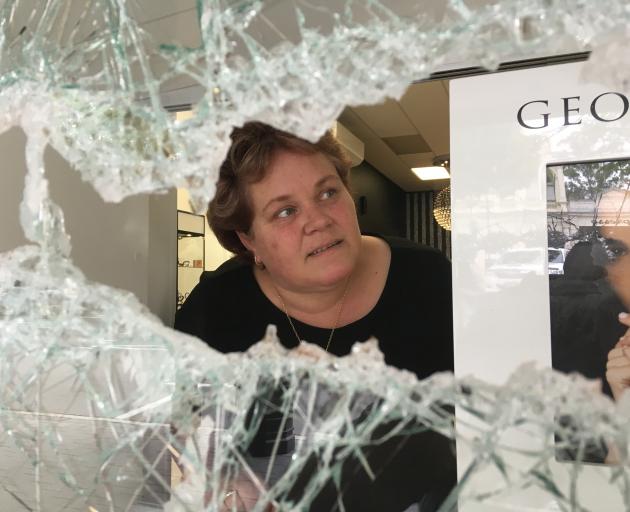 Ballantynes Showcase Jewellers owner Wendy Bradfield inspects damage to her shop in lower Thames St, Oamaru, yesterday after a front window was smashed and jewellery taken. Photo: Daniel Birchfield
A devastated Oamaru business owner is struggling to come to terms with the fact her lower Thames St shop was targeted in a brazen smash-and-grab yesterday.

Ballantynes Showcase Jewellers owner Wendy Bradfield raced down to her shop shortly after 1.20am to find valuable stock gone.

She immediately called police and remained at the scene for most of the night, and was open for business as usual yesterday.

Senior Sergeant Jason McCoy, of Oamaru, said the offender or offenders smashed a front display window and helped themselves to several pieces of valuable Meadowlark jewellery.

Police spoke to store staff yesterday and a scene examination was also completed.

Georgini brand jewellery was also in the display cabinet, as was a range of Pounamu jewellery.

Mrs Bradfield was in the process of completing a stocktake to ascertain exactly how much jewellery was stolen and its value, which she expected would total several thousand dollars.

Snr Sgt McCoy said that smash-and-grab break-ins were not common in Oamaru.