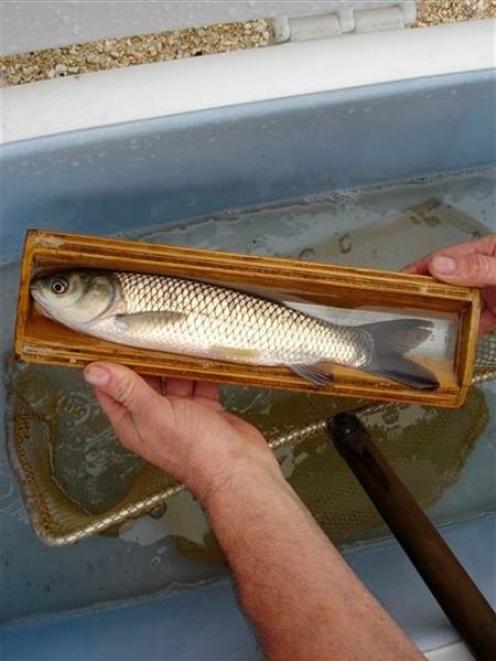 The North Otago Irrigation Company (NOIC) has applied to the Minister of Conservation to transfer and release grass carp into the main intake canal from the Lower Waitaki irrigation pond at Bortons to its pumping pond and house next to State Highway 83 and the canal on top of the downlands between pump houses 1 and 2.

It is an attempt to reduce the cost of controlling aquatic weeds blocking screens at the pump house, causing the pumps to shut down.

Company chief executive Robyn Wells said yesterday the proposal was a trial, to see if the fish could control the aquatic weeds.

The other alternatives were using sprays, which the company did not want and could not use in water destined for stock and irrigation, or costly labour-intensive raking of screens.

Grass carp were ''an environmentally-elegant solution'', she said.

Orewa company New Zealand Waterways Restoration had been contracted for the trial, and it would determine how many fish would be released to meet the target levels of control set by the irrigation company, she said.

If the trial was not successful, the carp would be removed.

The NOIC takes water into its canal from the Lower Waitaki Irrigation Company's Bortons Pond, between Georgetown and Duntroon and next to the Waitaki River.

Mrs Wells said the company had a very effective fish screen at its intake which would prevent carp from escaping, and it would also have to meet strict criteria laid down by the Department of Conservation if the application was granted.

The only other place grass carp have been released in the central South Island is at Lake Hood, near Ashburton, a controversial move about a decade ago.

The Central South Island Fish and Game Council is obtaining details of the application to determine what stance it will take. Chief executive Jay Graybill emphasised grass carp were ''a completely different creature'' to koi carp, which were regarded as a noxious fish. NOIC's application has been advertised for public submissions, which close at 5pm on March 22.