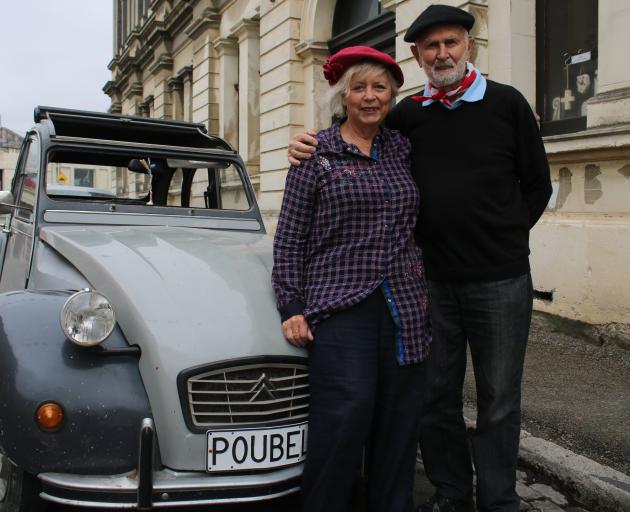 Poubel the Citreon 2CV with owners Christy and Ken Rolfe. PHOTOS: ASHLEY SMYTH
Astute viewers of TVNZ’s latest television drama Under the Vines may have recognised the distinctive chassis of a North Otago-based French extra.

Poubel, a 1986 Citroen 2CV owned by Waitaki Bridge couple Christy and Ken Rolfe, had a starring role in the six-part series, which was filmed in and around a vineyard near Alexandra.

Vehicle wrangler Cam Williams, who was in charge of sourcing the vehicles and looking after them off-set, described Poubel as the "hero vehicle".

"The premise of the show is both Daisy [Rebecca Gibney] and Louis [Charles Edwards] inherit this rundown vineyard in Central Otago," Mr Williams said. 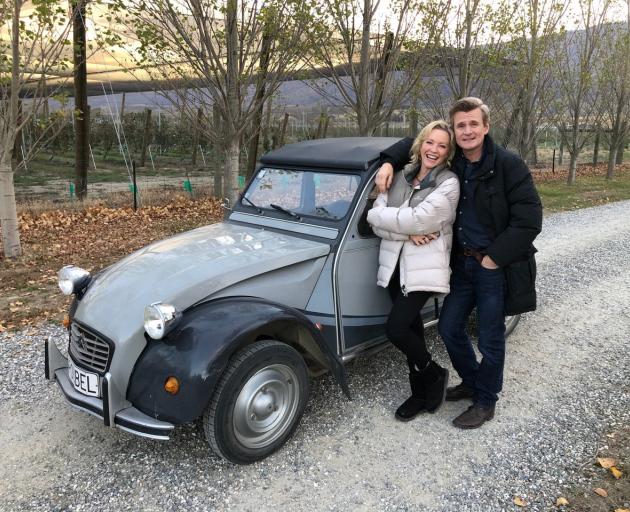 Under the Vines stars Rebecca Gibney (Daisy) and Charles Edwards (Louis) and Poubel the Citroen 2CV.
"The bloke who owned the vineyard had the 2CV and kept it under cover in a shed on the vineyard. When Daisy and Louis arrive at the location, they have a snoop around the find the 2CV.

"Aside from a bit of farming equipment, this is the only vehicle they have. So it becomes the hero vehicle."

Mrs Rolfe said she had heard from a friend who owned a similar car that the film crew had been looking for a car like theirs, which had not been modernised.

"She is absolutely as we bought her 17 years ago and before that she belonged to the chief librarian in Timaru, so she only went to work and back each day.

"It was our birthday — we have our birthday on the same day — and our wedding anniversary too, and Ken said ‘look at this’ and there was a phone number.

"So we rang the person, and we were interrogated as to our mechanical knowledge and pretty much, social standing . . . and then we went to see it."

The name Poubel came about because the Rolfes were looking for a French name that had the right number of characters for the licence plate. It is a shortened version of poubelle, which means rubbish bin in English.

"We looked at her, and said ‘look at the state of her, she looks like a tip already’, and we were taken back to when we house-sat in France, and the expats were all having dinner, and they were all talking about meeting people at the poubelle, or taking things to the poubelle, and when we got home we said what the hell were they talking about, then we came across this sign going into the village — it said La Poubelle ...

"So we went down there, and all there was was a line of two-tone grey, industrial wheelie bins.

"We thought, if we shorten it to the number of letters that you’re allowed, it’ll do." 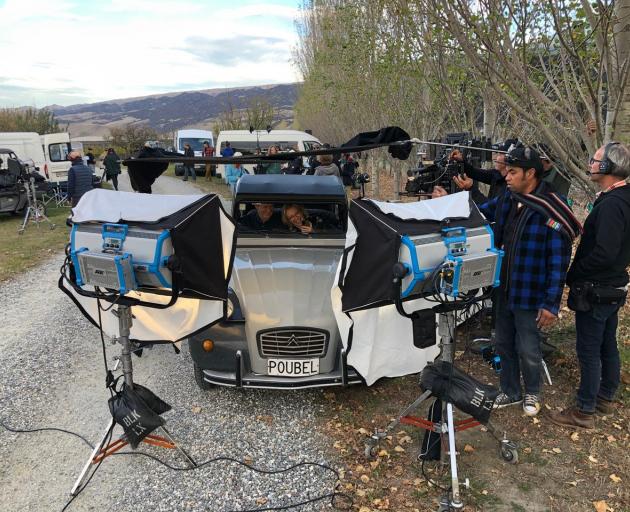 Poubel the Citreon 2CV is the ‘‘hero vehicle’’ in the the TVNZ and Acorn Films production Under the Vines, filmed in Central Otago.
The Rolfes initially had no idea what the show Poubel was starring in was about, but said the money they received from lending her enabled them to put some money "back into New Zealand tourism" and paid for a holiday in Stewart Island and to explore more of Southland.

They had since watched Under the Vines on television and enjoyed it.

"They told us that it was."

Poubel was already locked in for the second series and filming would start in about two months’ time.

"They phoned us a couple of months ago and said ‘we’re writing a second series, it’s been so well received overseas. It’s a feel-good, it’s the right time for that, and would Poubel be available?’

"So we said ‘sure’, and in the meantime, we did a tour with 19 other little cars all round the Eastern cape of the North Island. We got to stroke stingrays, and have wonderful tourism experiences.

"When we go off like this, it’s a raid. We go to places of cultural and scenic significance.

"Some of us say that through our 2CV — our deux chevaux — we have got to know our country." 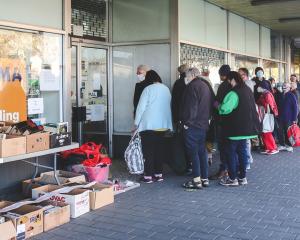