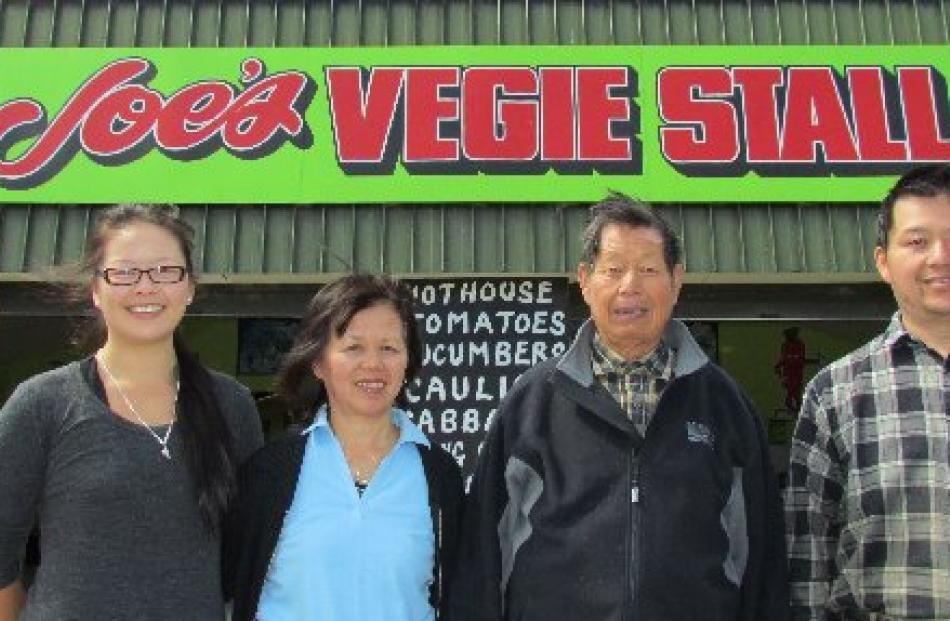 From left, Melinda, Suzie, Reggie and Steven Joe, in front of the family business beside SH1 in Alma. Photos by Ben Guild. 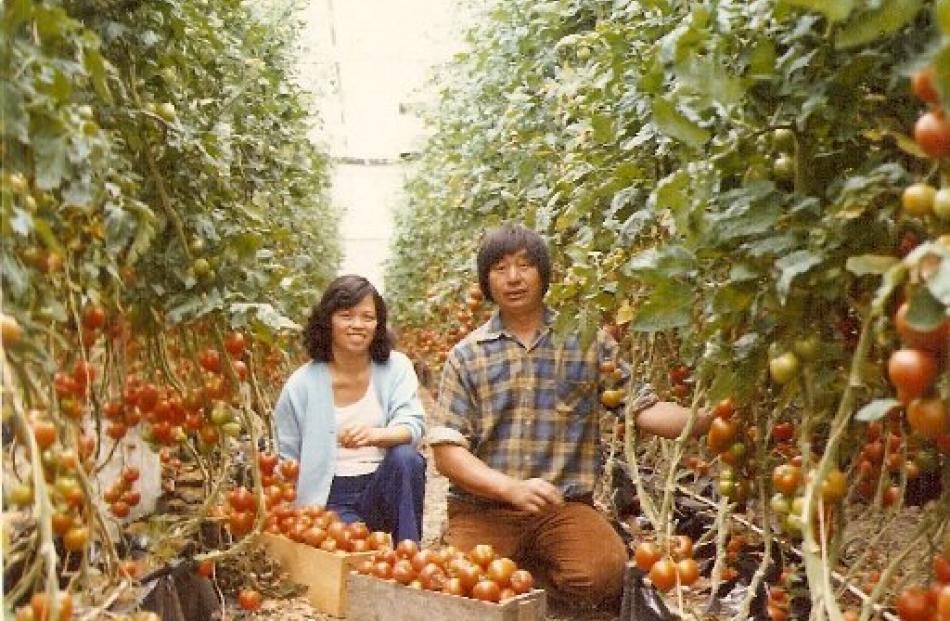 Suzie and Reggie Joe among their tomatoes, then grown in sawdust, in 1981. 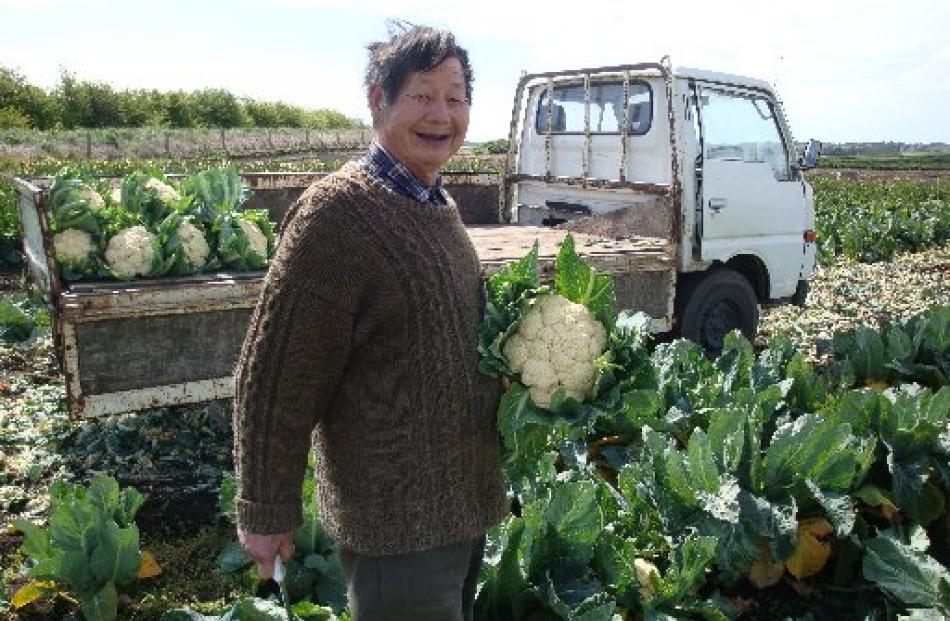 For nearly 40 years, Reggie Joe's vegie stall just south of Oamaru has been an oasis of vegetables and fruit, particularly when the early new potatoes are in. Ben Guild reports.

Suzie and Reggie Joe among their tomatoes, then grown in sawdust, in 1981.

Reggie Joe takes as many days off a year as Santa Claus works.

Every day, apart from Christmas Day because of recent protests by family members, the 77-year-old rises early to prepare Joe's Vegie Stall for opening beside SH1 at Alma, south of Oamaru.

He and wife Suzie have had the stall for nearly 40 years and have only ever taken two holidays together - the first of which was a two-week honeymoon spent in Northland in 1966.

The pair last holidayed in 2004, when they revisited the top of the North Island.

Mr Joe vaguely recalls travelling to Stewart Island "20-something years ago", and the couple have also taken a few two- or three-day work-related trips.

It sounds crazy, but the family's logic behind the taxing work regime becomes clear once their origins are considered.

Mr Joe moved to New Zealand from China in 1939 at the age of 4 with his mother and two sisters, settling in Martinborough in Wairarapa - narrowly avoiding the beginning of World War 2.

"We were very lucky to get out," Mr Joe said.

His grandfather had arrived earlier, in the late 1800s, and his father followed him in 1919.

After schooling, and "mucking around Wellington all over the place", Mr Joe joined his two sisters in Balclutha, where he worked in a garden in summer and a shop in winter.

Later, he returned to Wellington, where he met future wife Suzie at a dance.

A move to Oamaru followed, and after an ill-fated business venture in Oamaru, Joe's Vegie Stall opened in 1973.

Various generations of Mr Joe's family came to New Zealand over an extended period of migration for the Chinese, meaning Mr Joe has relatives as far away as Canada and Peru.

Initially, it was generally only the men who came because of the 100 poll tax that was imposed on the Chinese alone, which could have taken a Chinese worker up to a decade to save.

"The Chinese were so poor - that's why they ended up travelling to all parts of the world," Mr Joe said.

"They were treated badly, but they put up with it because it was so much better than it was at home."

Some New Zealanders could not understand what real poverty was, he said.

"If only some people in New Zealand today had a little bit of hardship they might look at life a little differently.

"They moan and say they don't have enough to live in dignity, but that's the way it is.

"People have no idea how poor people can be."

The story of a sister, who died when Mr Joe was young, aptly illustrates his point.

"We were both crook; we just didn't have the money for medicine; we just had to let her go."

Little wonder, then, that the family has worked so hard for so long.

Mrs Joe also grows paddocks full of lilies and laughed at the irony as her "mean old thing" of a husband had, many decades before, refused to buy the flowers for her.

Once, when the business was producing six tonnes of tomatoes a week from 22,000 plants, the couple would often work 20-hour days.

The family also operated a second vegetable business in Oamaru from 1998 to 2011, and cultivated an enthusiastic following at the Otago Farmers Market in Dunedin for about 10 months in 2004 before deciding to concentrate on their core business.

"We started off from scratch; right from nothing. Pure hard work has got us into this position, looking after our customers and growing our own produce," Mr Joe said.

"We try to keep the prices low and look after our customers. It's pretty hard work, but we've made a pretty good success of everything.

"The main reason for our success is I've kept up with the modern equipment, and we are able, with only one man out there, to grow a tremendous amount of stuff."

The contributions of sons Steven (45) and Graeme (41), who now owns a similar shop in Caversham, and daughters Karen (40) and Melinda (29), had also proven invaluable.

The siblings somewhat bucked the trend of the younger generation of Chinese market gardeners who left the land, although Melinda, who graduated in information science from the University of Otago, is a talented performer and has secured the lead in an Auckland production of Thoroughly Modern Millie, which begins in March.

Forklifts, too, had been especially useful given Mr Joe once carried crates on his back, and relatively few outgoings meant the business had remained viable.

"We own everything we've got; we don't have to hire land. If we had to lease buildings and that we'd be out of production," Mr Joe said.

Still, pure economics meant business was tough, especially in a long, spread-out town like Oamaru, which had three large supermarkets.

"The supermarkets are too powerful now," he said.

"They can open the doors from 7am to 9pm - they do a very good job, but they can afford the best of things, the best of staff.

"They put the prices up, but the people support them.

"It's hard for [the customers]. After a while they just pay it.

"If I was told about this 40 years ago, I might not have wanted to do it."

Looking at his kitchen table, replete with towering stacks of business papers, it is hard to believe that.

With a nostalgic smile and brimming pride, Mr Joe happily recounted stories of the customers to whom he and his family had dedicated themselves.

"A lot of people say 'I used to come in here when I was a little boy or girl with Mum'," he said.

One customer - Dr David Holdaway, a pediatrician from Dunedin who used to come in weekly with ice creams for all the staff - came in for special praise.

He believed such generosity illustrated a marked change in the treatment of people of Chinese descent in New Zealand.

"Kids could be quite cruel," he said.

"And the government of the day [post-World War 2] wanted to kick us back to China, but at the end of the day they changed their minds.

"It's just a change; it's like the blacks in America. Not that long ago they used to treat them like dirt. Now they are their champions."