Cyclist says shots fired at him 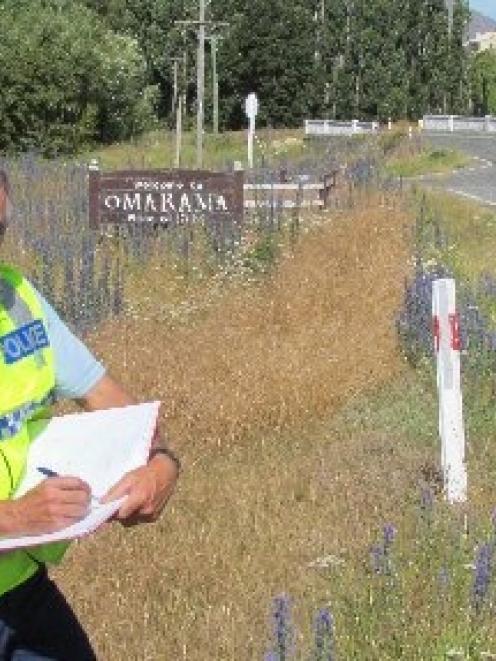 Community Constable Bruce Dow, of Oamaru, on SH8 near the Omarama Stream bridge where a cyclist was allegedly shot at from two cars on Sunday. Photo by Ben Guild.
A cyclist has told police he was shot at from two vehicles near Omarama on Sunday afternoon.

Community Constable Bruce Dow, of Oamaru, said the rider reported the incident happened on the 400m stretch of SH8 between Broken Hut Rd and the Omarama Stream Bridge, near Omarama.

The cyclist, in his early 60s, who declined to be named, yesterday told the Otago Daily Times he had turned right from Broken Hut Rd on to SH8 towards Omarama about 5.15pm, when two vehicles overtook him at speeds of between 70-80kmh.

He said a passenger in the first vehicle, a black Mitsubishi Lancer, fired two shots, which were followed by a further shot from the trailing off-white Toyota Hiace van.

The man was taken aback as he heard the bullets fly past.

"I just couldn't believe that someone was shooting at me," he said. "It was one of the worst experiences I've ever had.

The man had dropped his head to use his helmet for protection from the bullets, then saw a volley of shots fired from the vehicles into trees at the Omarama Top Ten Holiday Park.

"I could hear the shots shredding the leaves of the trees - it was serious stuff," he said.

Const Dow said the man held a firearms licence and knew the difference between a "shotgun bang, a rifle crack and the sound of an air-rifle" - and believed the weapon involved to be a rifle.

After being fired upon, the man rode the short distance to Omarama, where he rang police about 5.30pm with the details of the black Mitsubishi, which he had spotted stopped at the town's Mobil garage.

He said he would do things differently next time.

"I wasn't thinking clearly enough. I had a cellphone in my pocket, I could have taken a photo," he said.

"They saw me and that made them bugger off, I'd say."

Const Dow said the Mitsubishi left Omarama for Twizel, where it was stopped by police and searched. No weapon was found and those questioned denied any knowledge of the incident or association with the occupants of the off-white van.

Inquiries are continuing, and anyone with information about the van is encouraged to contact police.

The man said he wanted justice to be done.

"I'd obviously like them caught - they're just a menace to society."