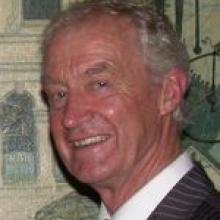 Alan McLay
The North Otago Irrigation Company faces a dilemma as it starts the second stage of adding another 10,000ha to its scheme - and it wants the community to help solve it.

The $67 million scheme, delivering water from the Waitaki River to farms on the North Otago downlands and in the Waiareka Valley, was opened in 2006, and now has 90 shareholders irrigating 10,000ha.

The first stage has enough capacity from its intake and pump-house at Black Point to handle a second stage of 10,000ha, helped by a $10 million loan from the Waitaki District Council which is now worth about $13 million, with accrued interest.

North Otago Irrigation chairman Alan McLay said work had now started on the 10,000ha second stage, but the company wanted to do more by future-proofing the scheme and providing enough water for a third stage of up to 10,000ha.

The problem is the added cost of providing enough capacity in the second stage for a third, which could go as far south as Waianakarua-Hampden and have the potential to provide potable water for rural and urban water schemes in water-short areas as far south as Palmerston or even Waikouaiti.

"Water is the new gold and we only have to see the benefits to the community from the first stage to realise that. It's the first time in my 45 years living in the district that I can remember how well we weathered a world-wide recession and a drought, better than most other places in New Zealand," he said.

Mr McLay said studies had shown that for every dollar invested in irrigation, $8 was returned to the community.

"It's not just the farmers who benefit, it is the whole community," he said.

The first stage of the scheme had brought more families into the district, created farms with higher capital values that paid more in rates to the Waitaki District Council, boosted rural school rolls and employment and put more money into the towns through higher and more secure farm incomes.

Work has started on a pipeline from below pump station 2 to the Smillies Rd area. The first section to Paradise Gully has been completed, resulting in the company repaying $500,000 to the council.

Planning for stage 2 includes providing water under pressure to farms south of the Kakanui River to Maheno.

Mr McLay said the company was investigating the two options in conjunction with the second stage: The first was to irrigate just 10,000ha, effectively completing the original plan for the scheme but leaving no capacity available for the future.

The second option was to build extra capacity to allow for a further 10,000ha and making water available to farms further south than the Kakanui Valley.

Mr McLay said the company had made no decisions, but was investigating how to do it and financial models to fund a third stage.

"That is a decision not just the company and farmers but the whole community needs to be involved in, including whether extra capacity should be built to future-proof the scheme and how we fund that," he said.