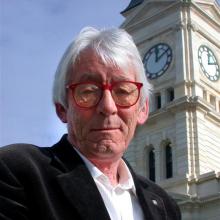 Jim Hopkins
An Oamaru ward councillor has lambasted the wording of a Waitaki District Council consultation document as "alienating".

Cr Jim Hopkins’ comments came at an additional meeting of the full council on Tuesday while councillors were discussing its community engagement plan and consultation document for its proposal to join the Local Government Funding Agency.

Last month, councillors moved in favour of aligning the council with the agency as a non-guaranteed member, which meant its borrowing would be capped at $20million.

While Cr Hopkins supported the proposal, he was scathing of the wording of the consultation document and made his feelings known to council chief financial officer Paul Hope.

"I am annoyed ... is it your view that only people with university degrees have opinions worth listening to? Why have you written a consultation document in language appropriate for economics stage one ... not economics 101?"

That prompted Waitaki Mayor Gary Kircher to tell Cr Hopkins to "dial it back a little bit".

"You have got the opportunity to discuss this ... I think you are making a statement to be honest."

However, that did not deter Cr Hopkins.

"We want people to tell us what they think. I believe we owe them the courtesy of communication in a clear, simple, easy to understand, reader-friendly language and this isn’t any of those things, in my view.

"I suspect we won’t get feedback because your document is so alienating."

Mr Kircher said he was "not overly happy" with Mr Hopkins’ outburst about the wording.

Mr Hope said the issue was a "complex one", which had to be explained.

"It is a formal document and there would be other communication to clarify. Unfortunately ... it’s going to be a technical consultation and we are a wee bit limited about what we can put in and how we put it in."

The council had not planned to join the agency that helps finance the local government sector before next year’s long-term plan development process, as at the time it was not anticipated the council would have to borrow from external sources.

The public consultation period runs until July 8 and submission hearings and deliberations are scheduled for July 14.

A final decision will be made by councillors on July 28.