Dream of living in castle comes to life 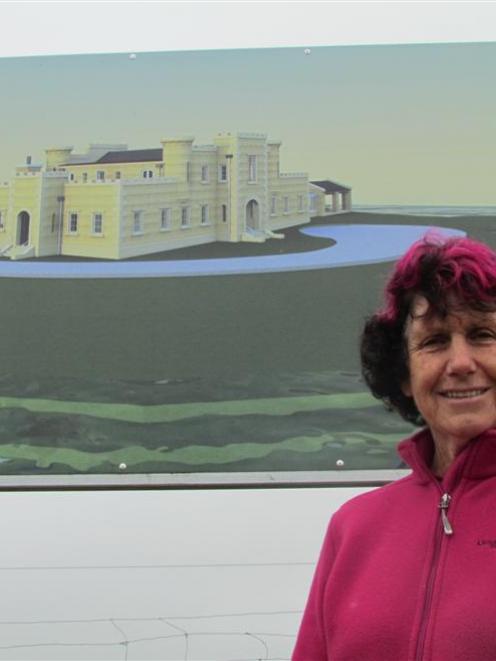 Dot Smith with an artist's impression of what her new home will look like. Photo by Andrew Ashton.
For the past six months a North Otago gift shop owner has been watching her childhood dream slowly come true, as work progresses on her very own fairytale castle.

Hilderthorpe resident and Riverstone Country gift shop owner Dot Smith said she had wanted to live in a castle for as long as she could remember, and after a three-year wait for resource consent, work on a six-tower castle, complete with moat and drawbridge, began last December.

Mrs Smith said it would be another two years before she and her husband Neil could move into the castle. It would be the only ''new home'' they had lived in.

''We have only ever lived in farm cottages on farms before, so this will be the first time we have had a new house.''

The 65-year-old said the chance to live in a castle was ''a dream come true''.

''Some people have a dream to own a Porsche. My dream has been to live like a princess in a castle, and really, everybody's home is their castle.''

Although the castle would also have a ''secret tunnel'', along with a basement and dungeon, the building was intended as ''just a home'', she said.

''Hopefully, it will be lots of fun for the grandkids.''

Oamaru builder Mike Spiers was part-way through building houses on a subdivision in Oamaru when he was approached to build the castle.

''I was pretty overwhelmed really, but I felt very lucky. Pretty much the whole plan is a lot different from normal buildings.

''Engineers are involved the whole time, so pretty much every step has to be signed off by an engineer.''

Ms Scott said after considering many materials to build from, it was decided that the castle, which would cover a 1150sq m area over two floors, should be a solid masonry building clad in traditional Oamaru stone with ''huge thick walls fully insulated externally between the core and the veneer.''

Although the project had presented ''many challenges'', it had also been rewarding.

''From the outset, I totally fell in love with my wonderful, hard-working, inspirational clients. We have since become good friends and I have travelled to China and the UK with them, a combination of research and acquisition.''

The project was her ''first and only castle'', she said.