By Daniel Birchfield
0 Comments
For one enterprising 12-year-old, setting up shop at yesterday’s Victorian fete in Oamaru’s Victorian precinct turned out to be a profitable exercise.

As people paraded along Harbour St in all of their Victorian splendour at the final event of this year’s Victorian heritage celebrations, tucked away to the side was Elliot Mackenzie.

Elliot was offering a shoe-shining service, and by early  afternoon he had collected a tidy sum from those in need of a quick polish. 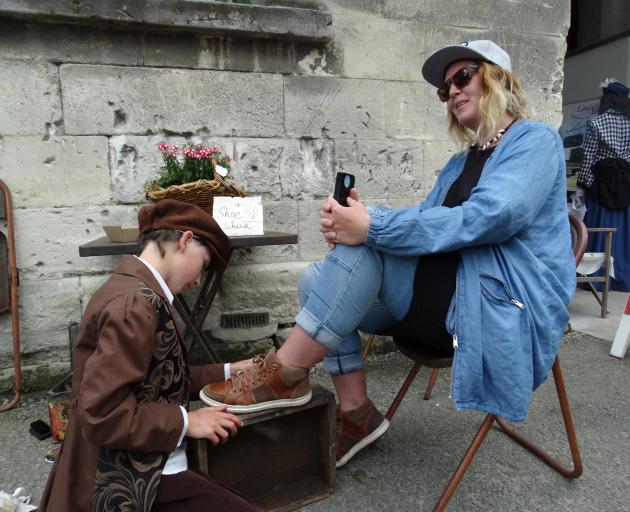 Elliot Mackenzie shines the shoes of Hannah Denny. Photos: Daniel Birchfield
Dressed in a brown cap with a matching vest, jacket and pair of trousers, Elliot said business had been "amazing", considering it was the first time the young entrepreneur had offered the service.

He said the secret to a good shine was  using just enough  polish to get the job done.

"You have to make sure you have enough so you don’t run out."

As far as the money he earned was concerned, he said he planned to buy some more polish or perhaps something else to add to his wardrobe for next year’s Victorian celebrations.

As Elliot polished away, hundred of people wandered along Harbour and Tyne Sts below strings of red, white and blue-coloured bunting to enjoy the entertainment and stalls.

Over on Tyne St, Captain Festus McBoyle, his wife Miss Lucy Drawers and strongman "The Great Ebeneza" entertained the crowd with their unique brand of music and tales of their adventures on the high seas.

The always popular Oamaru stone-sawing competition again drew a large number of spectators, most of who left covered in a fine layer of white dust.

While part of the heritage celebrations, the fete is organised by the Oamaru Whitestone Civic Trust.

Other events are organised by the Victorian Heritage Celebrations committee.

A pair of stilt walkers tower over the crowd.
Committee chairwoman Diane Lee said all ticketed events had sold out.

"The word is getting out that this is something to come to. I think there were more new people coming this year too that we haven’t seen before, so that’s encouraging."

She said Elevenses with Mrs B on Friday, the gentleman’s relish burlesque night on Thursday and the 11-course Victorian banquet on Saturday were the highlights of this year’s celebrations.